The Lair 2022 Movie Review and Trailer 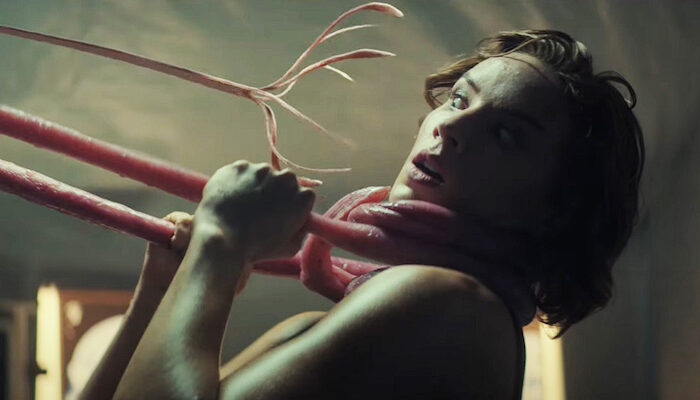 Two decades after making his debut with werewolf war movie “Dog Soldiers,” Neil Marshall offers another spin on military-vs.-monsters action in “The Lair,” a semi-return to form that’s energetic if uninspired and increasingly silly. Nonetheless, it represents a bit of a rebound after the disasters of last year’s “The Reckoning” and an unhappy “Hellboy” reboot he disowned. This first issue from Scarlett Prods., the company he founded with star, co-writer and executive producer Charlotte Kirk, gets released by RLJE Films to limited U.S. theaters as well as VOD and digital Oct. 28. Launch on multi-territory genre streaming platform Shudder is planned for early next year.

This first issue from Scarlett Prods., the company he founded with star, co-writer and executive producer Charlotte Kirk, gets released by RLJE Films to limited U.S. theaters as well as VOD and digital Oct. 28. Launch on multi-territory genre streaming platform Shudder is planned for early next year.

It remains to be seen if the Marshall-Kirk alliance is going to generate much more than glorified vanity-project vehicles for the second party, or be the best use of the first one’s talents. But Kirk is OK here stepping into a rough-and-tumble heroine role akin to that of Milla Jovovich or Kate Beckinsale in the “Resident Evil” and “Underworld” franchises. Whatever else one can say for it, “The Lair” as a whole is certainly less embarrassing than “Reckoning,” which had her as an absurdly glam, witchy 17th-century peasant.

Here, she is Lt. Kate Sinclair, a Royal Air Force pilot shot down in 2017 Afghanistan. Armed insurgents chase her into an underground bunker not found on any intelligence map, apparently a top-secret relic from Soviet occupation days. Fleeing down, down, down into its depths, she discovers some sort of laboratory whose white-robed staff are still present — as corpses mummified in terminal poses of abject terror.

She and her pursuers soon learn why: The experiments that went on here decades ago left behind very toothy, reptilian man-beasts preserved in suspended animation. All too soon, they re-animate, demonstrating a penchant for removing faces whole with one claw-swipe, then eating the leftovers. Sinclair alone manages to escape, getting found in the arid, rocky landscape topside by U.S. troops based nearby. The eyepatched major in charge (Jamie Bamber) assumes her story is a PTSD-induced hysterical fiction; Sgt. Hook (Jonathan Howard) lends a more sympathetic ear.

But no one doubts her anymore once night falls, when the now-fully-liberated lab creatures lay siege to the compound. Presumably bio-engineered to create some kind of Cold War supersoldier, they prove very hard to kill, though a grenade or bludgeoning skillet can manage nonetheless. Conversely, these uglies make short work of the stationed grunts. Just a handful remain alive by the film’s midpoint, including figures played by Kibong Tanji, Leon Ockenden, Mark Strepan and Troy Alexander, plus Hadi Khanjanpour as a captured local. Lacking enough fuel to flee enemy-combatant territory, they decide instead they’ll have to raid the underground bunker in order to at least vanquish their non-human foes.

Shot on Hungarian locations passably standing in for the Nangahar Province’s remoter reaches, “The Lair” has some of the muscularity of “Dog Soldiers” and Marshall’s career peak to date, 2005 spelunking horror “The Descent.” But his scripts for those films were better than this one, with its lumbering attempts at uber-tough repartee and characters drawn (as well as played, with cartoonish accents) in broad, blunt terms.

It is not always clear just how tongue-in-cheek we’re meant to find all this chasing about by next-generation Creatures from the Black Lagoon, and moments meant to be thrilling or funny instead too often come off as on-the-nose hokey. (The biggest laugh occurs when it is proposed that the Soviets only invaded Afghanistan as a “smokescreen” to cover up a crashed alien spacecraft’s discovery.) The film’s incidental politics are also groan-worthy, with those retro Russkies surely up to no good and interchangeable Afghan insurgents dispatched with such trigger-happy zeal.

Still, if the results are inferior to Marshall’s early features, not to mention the conceptually derivative but vigorous bigger-budget ones he did next (2008’s “Doomsday,” 2010’s “Centurion”), “The Lair” at least reaffirms his ability to enliven formulaic content. There’s nary a dull moment, albeit no truly memorable ones either. It’s a movie more hectic than exciting, let alone scary. But it does move along at a brisk clip that attests to the director’s knack for staging and pacing splattery action.

Given likely limited means, the production is resourcefully well put together in tech and design terms, though it might’ve benefitted from accompaniment less standard than the percussive bombast of Christopher Drake’s original score.