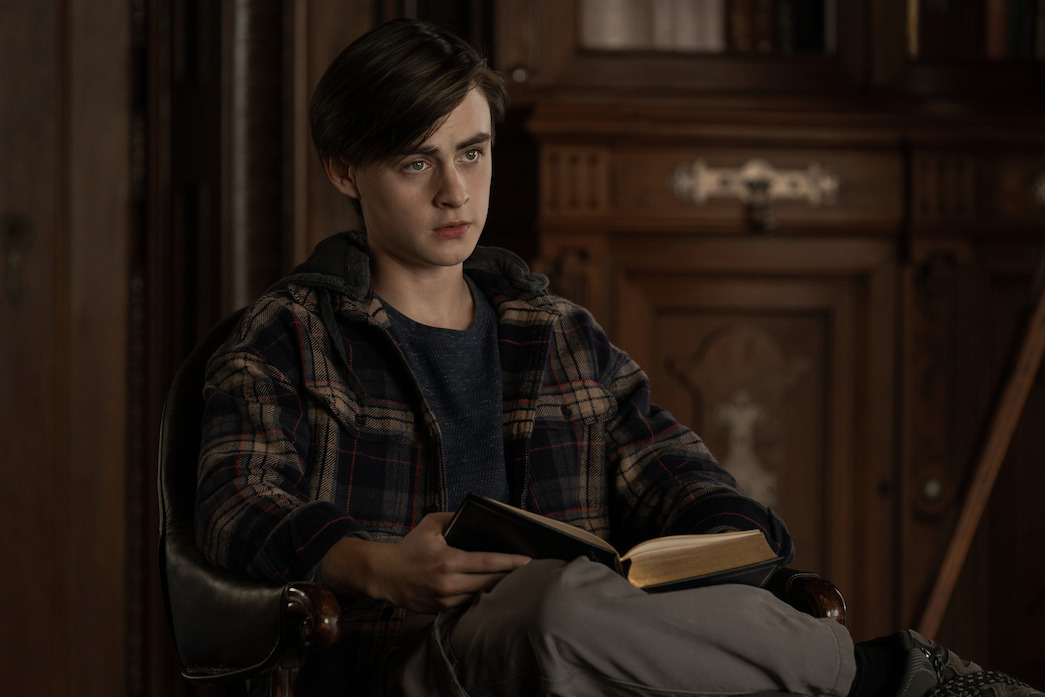 Located halfway between the coming-of-age nostalgia of “Stand by Me” and the horror content of … well, nearly every other Stephen King-derived movie, “Mr. Harrigan’s Phone” ends up too mild on either count to make a memorable impression. Still, John Lee Hancock’s adaptation of the same-named novella (which led off King’s 2020 collection “If It Bleeds”) handles the rather thin source material adeptly enough to make for an entertaining middleweight drama tinged with the supernatural. It premieres on Netflix Oct. 5, getting Halloween month off to a moderately creepy start.

Craig (Colin O’Brien) is still a child when his mother dies of cancer in 2003, leaving him alone in his Maine small town with an equally bereft father (Joe Tippett). It is a welcome distraction, then, when his Scripture recitals in church attract the attention of Mr. Harrigan (Donald Sutherland), a billionaire financial tycoon who’s retired to this nondescript burg in order to spend his twilight years out of the spotlight. His eyes are failing, so he offers Craig a regular after-school gig of reading aloud from literary classics — starting, rather inappropriately, with “Lady Chatterley’s Lover,” but soon embracing Dickens, Conrad, Dostoevsky and so forth.

That arrangement suits both parties fine, and while Mr. H. is a reserved, old-school gent, they soon enjoy one another’s company. The older man is fond of including lottery tickets with holiday cards; when Craig (now a teen played by Jaeden Martell) scores a $3,000 win, as thanks he gifts his benefactor an iPhone such as he himself has recently gotten. It is politely declined by the Luddite recipient till he realizes he can get stock tips a lot faster online than by waiting for yesterday’s Wall Street Journal to arrive. Not long after, Harrigan dies of natural causes. As a sentimental gesture toward the bond between them, Craig slips that phone into the open casket at the funeral service.

Until this point, there’s really been no otherworldly aspect to the story, a lack Hancock tries to work around by applying some basic, superfluous Gothic atmospherics, as well as ominous notes from Javier Navarrete’s score. Sutherland is directed to play his role somewhat more imperiously than it’s drawn in the book, and a montage of newspaper clippings suggests Mr. H. could be a fierce, even malicious foe when crossed during his career heyday. Nonetheless, he isn’t much as a figure of fear. So it’s not terribly spooky when Craig — using his late mentor as an imagined voicemail confidant — gets the occasional cryptic “response” on his own cell.

Dad dismisses the phenomenon as a prank by someone who’s hacked the old man’s phone. However, when our protagonist suffers abuse at the hands of a school bully (Cyrus Arnold), then grievous harm befalls a beloved teacher, Craig angrily calls upon his late friend — and lethal justice is promptly, mysteriously delivered.

King’s tale feels stretched thin even at its original 90 pages, coming off as an extended anecdote sans much weight. It’s also weakened by a narrator’s voice that sounds an awful lot like a boomer author rather than a 21st-century youth, particularly in the emphasis on “Gee whiz, the technology these days!!” stuff. Apart from a stretch that feels too much like an Apple commercial — promoting the joys of a younger generation introducing grandfatherly oldsters to them intrawebs — Hancock manages to downplay those elements with some finesse.

But he remains faithful enough that the film never really builds much suspense or mystery. Sutherland does not reappear as a senior variation on his ghoul at the end of Philip Kaufman’s great “Invasion of the Body Snatchers” version 44 years ago. However, whatever his character is capable of from the grave remains murky and not especially interesting, given that the victims are certifiable Bad Guys who “deserve it,” their fates mostly kept off-screen. Nor is Craig’s remorse after each demise very compelling — no more so than his pleasant if blandly sketched relationships with Dad, a first girlfriend (Thalia Torio) or a supportive high school instructor (Kirby Howell-Baptiste).

The results, balancing overfamiliar warm-and-fuzzy growing-up saga and halfhearted horror revenge tale, evaporate quickly from the mind — there’s little cumulative force that might linger. Yet at the same time, Hancock does an admirable job keeping this hour and three-quarters polished and engaging, maintaining consistent viewer interest even if the ultimate reward underwhelms. Eschewing any flamboyant turns, his well-cast actors lend their characters low-key naturalism — including a primarily sedentary Sutherland and that hulking bully — while the presentation is handsome in a straightforward, non-flashy way.

Best known for liberally dramatized inspirational biopics (“The Bright Side,” “The Rookie,” “Saving Mr. Banks”), writer-director Hancock demonstrates no particular feel for thriller mechanics — though “Mr. Harrigan’s Phone” still works better within that general framework than his ponderous serial-killer police procedural “The Little Things” from last year. This latest may not rank among the best screen Stephen King adaptations, but God knows it’s nowhere near the worst.