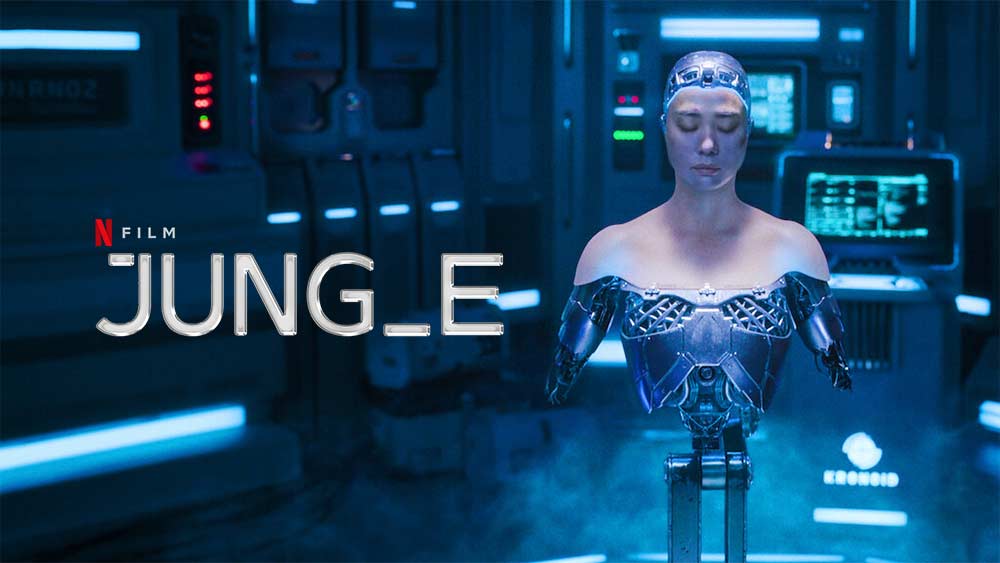 Netflix is releasing the new Korean movie Jung_E, which follows the mysterious attempt to create a perfect combat AI using the brain of a war hero.

Jung_E Korean scifi movie on NetflixNetflix
Jung_E is an admittedly odd film, a South Korean sci-fi hybrid of Blade Runner, Robocop, and Ex Machina seen through the prism of mother-daughter relationships. It’s a post-apocalyptic movie with detailed exposition and world-building, and yet mostly takes place in one lab. It has some exhilarating action sequences while also containing nearly one linear hour without any action at all. It has some over-the-top, comically quirky performances, but is also deeply emotional and serious. In short, Jung_E is weirdly structured but entirely memorable.

The Netflix film takes place in the latter half of the 22nd century when Earth is obviously wrecked and parts of humanity have migrated to the stars, hovering in city-sized space stations that look like galactic detritus. There’s a surprising amount of preface to the film, exposition which is later elaborated upon, considering that it doesn’t entirely matter. The essential takeaway is that endless war has been plaguing these colonies for decades, which is nothing new for humanity.

What is new, though, are the legions of robots that are being used to fight the war. Seohyun is the team leader of the Kronoid Lab, which is using advanced technology to replicate brains and create even better combat AI. Their main project — creating a flawless but powerful robotic duplicate of a war hero from decades ago, someone whose tactical, brilliant brain has been saved for replication.

Seohyun leads the lab with a cold, quiet insistence, in stark contrast to her boisterous, obnoxious counterpart, Sang-hoon (Ryu Kyung-soo). Sang-hoon exists on the business end of the spectrum, while Seohyun lives on the science side. Their whole project is accountable to the mysterious Chairman and the military-industrial complex which runs the Kronoid Lab. They’ve sunk a lot into this operation, hoping that the robotic rebirth of this war hero, Jung_E, will boost morale and secure victory.

As detached as Seohyun may be, this is an extremely personal operation — the war hero was her mother, a mercenary who died 30 years prior. In what’s likely to win the award for Biggest Conflict of Interest in 2023, Seohyun is paid by the government and corporations (which seem to be the same in the future, because of course they are) to bring her mother back to life as an unstoppable warrior.

The literal trials and errors of trying to get this robot to work make up the first act, which is followed by a sharp turn as events disrupt the lab’s endgame. It’d be a shame to spoil everything, but the middle act finds Seohyun opening up emotionally and disagreeing with the unsettling direction she is ordered to take the Jung_E project in. This culminates in the third act, which is essentially one extended action sequence that’s a banger of a blast. It’s a surprisingly simple story packaged in epic sci-fi fashion.

The mother-daughter relationship is arguably the most interesting facet of Jung_E, because the whole film can be seen as one woman’s healing process. In many ways, Seohyun is emotionally torturing herself by watching her mother die over and over again as tests and training fails; it’s a literal representation of guilt (especially survivor’s guilt), and it works well. Every big narrative turn in Jung_E’s plot corresponds to Seohyun’s development as she learns not to blame herself for her mother’s death and to liberate herself from that cyclical, painful guilt.

Jung_E doesn’t depict the war, the politics, or even much of the science or its philosophical implications, despite having enough world-building to do so. Other than a few trips along the suspension railway, which looks down upon the haggard city, Jung_E stays close to its titular robot mom and her daughter. This is their film, even if there are myriad interesting details going on in the periphery of Jung_E.

The set design (i.e. the lab) is neat without being unobtrusive, the cinematography is simple and efficient, and the music flows very well. Most of these things barely feel perceptible — they don’t dazzle or distract, but they work well in a streamlined way. The most effort is put into the sci-fi effects, with hundreds of people (split between a South Korean crew and roughly 50 Russian effects artists) working to create some very cool imagery.

From rotoscoping and match moving to CGI and practical effects, Jung_E combines various elements and yet feels wholly cohesive. There are, of course, rare shots that seem straight out of a PS3 video game, but the majority of the film looks great. The different robot designs are imaginative, if occasionally clunky in a Transformers kind of way, but there are certain scenes that are simply stunning. When the eyes move on one robot, a being caught up in the incongruity between a human mind and a metal body, it’s emotionally powerful and breathtaking.

The epic action sequence which ends the film looks fantastic most of the time and is wonderfully edited and performed. Unlike most CGI-heavy fight scenes, Jung_E isn’t disorienting and choppy; the viewer almost always knows where people are and what’s happening. Give or take sporadic instances in which the action is just downright illogical, in that physics-defying way which can snap the suspension of disbelief, the majority of these battles are beautifully done and look great.

Filmmaker Sang-ho Yeon took an interesting path with this film, drawing on sci-fi with much more intellectual, metaphysical, and political themes but discarding the cerebral stuff almost altogether in favor of an emotional portrait of a guilty daughter.

Yeon certainly knows how to make an impression. Acclaimed for his impressive Korean zombie trilogy (Train to Busan, Seoul Station, Peninsula), Yeon is an imaginative Renaissance man whose talents transcend the zombie genre. Case in point, Yeon broke onto the South Korean scene by making what’s considered to be the first animated movie aimed at adults in his county, The King of Pigs. He wrote and directed the film, but was also a voice actor, editor, key animator and background artist, storyboard artist, and character designer. The King of Pigs was even accepted into the Cannes Film Festival, breaking ground as it did so.