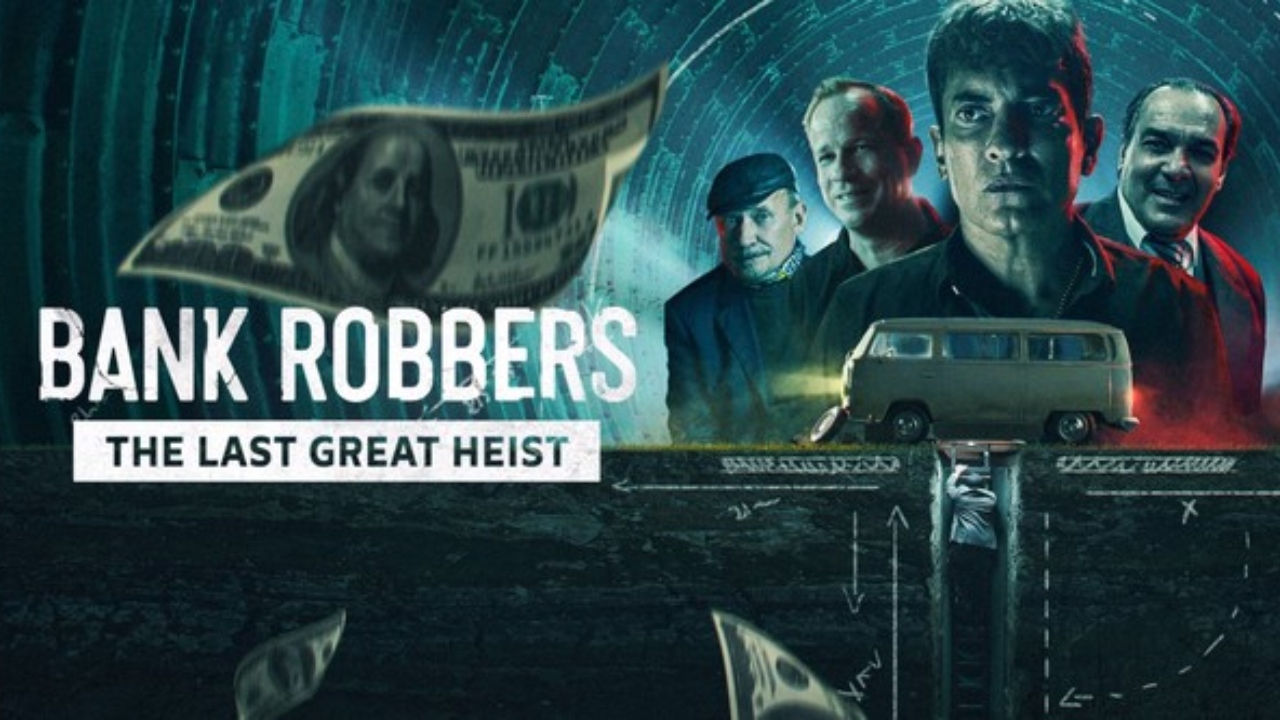 Morals are behaviors society judges. Ethics are behaviors that your conscience judges.” And with that bit of philosophy, we meet Fernando Araujo, “The Artist,” who conceived of, planned, and executed a bank heist because, as he says, life is finite and such an act would leave his artistic mark on the world. Araujo is part philosopher, part artist, part cannabis grower and enthusiast, and part martial arts practitioner, and most of the first part of Bank Robbers: The Last Great Heist sets up his worldview with moody visuals and music cues that recall Michael Mann’s 2005 film Miami Vice. Araujo knew he wanted to rob a bank, but also knew there “had to be some art in it.” So he thought about it, went crazy about it, and eventually came around to how he’d do it. It wouldn’t do to use guns and go in strong. But an after hours heist wasn’t feasible, either. The trick? Create a hybrid plan. And dig a tunnel.

And so Fernando assembled his crew. Childhood friend Sebastian Garcia Bolster, “The Engineer,” would fabricate special materials, like a hydraulic “power cannon” to pop open deposit box locks. Ruben de la Torre, “The Thug,” was a career criminal who was used to operating in hostage situations. Luis Mario Vitette, also a professional thief, would become “The Actor,” and deal with the cops on site. And El Nene (“The Kid”) and Julian Zalloechevarria (“The Countryman”) would serve as general-issue muscle and wheelmen. Garcia Bolster, de la Torre, and Vitette are all interviewed here along with Fernando. But each interview is separate, which suggests some lingering animosity amongst this bunch.

While part of his plan featured the traditional hard entry and armed corralling of hostages, where Araujo got crafty was with the construction of a channel that led from the bank’s basement down to an existing drainage tunnel. Once the bank’s occupants had been subdued, and the gathered police were stalled from entry, the heisters would leave with their loot via the channel, and cruise the drainage tunnel in a rubber raft until they reached an escape vehicle parked blocks away. The van’s false bottom would provide concealed entry from a sewer.

At 9:00am on Friday, January 13th, 2006, the heist began. Bank Robbers re-enacts the scene in a combination of physical miniature and the men themselves demonstrating with mannequins how they moved through the bank. Actual security camera footage from the heist also appears, as does archival news footage, as the robbery quickly became a media circus. With Vitette acting as a mouthpiece to the Falcon Group, Argentina’s Special Forces police, Fernando and de la Torre pushed into the basement, brought Garcia Bolster through their hole in the wall, and let his “power cannon” go to work on the deposit boxes. Then, it’s back into the tunnel for the big escape, the split of the loot, and the players going their separate ways. It was the perfect plan. But somebody always squawks.

What Movies Will It Remind You Of? The 2020 Argentine comedy The Heist of the Century was based on the Banco Rio robbery. Not only that, it was co-written by Fernando Araujo. And as long as we’re talking robberies, it’s worth revisiting The Bank Job (2008), an underrated heist thriller based on a real 1971 heist in London and featuring a fine performance from Jason Statham.

Performance Worth Watching: Fernando Araujo is interviewed in a scenic hovel set amongst the river foliage of Buenos Aires that is his art studio, living quarters, martial arts dojo, and indoor cannabis grow up all rolled into one. Well, it appears to be that, anyway.

Memorable Dialogue: Sebastian Garcia Bolster says that, at the time Fernando approached him about joining in on the heist, he was not a criminal and had never thought about doing anything wrong. “Robbing a bank,” however, “was all right. My family always suffered because of banks.”

Our Take: “What if, on D-Day, I suddenly open the hole and find the neighbor taking a dump in the basement bathroom?” Bank Robbers: The Last Great Heist really shines in its midsection, where Araujo and Garcia Bolster describe the problems they had to overcome and equipment they had to design and build in order to construct their ingress/egress channel and accurately access the bank’s deposit boxes. The doc takes on the trappings of a classic heist thriller as Araujo is seen in reenactment form, counting off the distance between the bank and the drainage tunnel’s opening, and Garcia Bolster uses a metal press and meticulous drawings to fabricate their materials. During one sequence, Araujo stands before an enormous blueprint, Danny Ocean style, and addresses his unseen crew, ticking off their tasks on “D-Day.” There’s even a miniature of the bank, shown in cutaway from a side view, that reveals the direction of their channel and the means of escape via the tunnel below. And when it was all said and done, the robbers left a philosophical note, honoring Araujo’s artistic aims. “In a rich man’s neighborhood without guns or grudges, it’s only money and no love.”

So did they get away with it? Well, it’s always difficult to not spend the loot, to not tell anyone about the robbery, and to not let the ones who did know keep quiet to the cops. So difficult as to be near impossible, as most every heist film has illustrated. Bank Robbers becomes so engrossed in the planning and implementation of the heist that it peters out a bit as loose lips cue the cops and best laid plans for anonymity become something much less so.