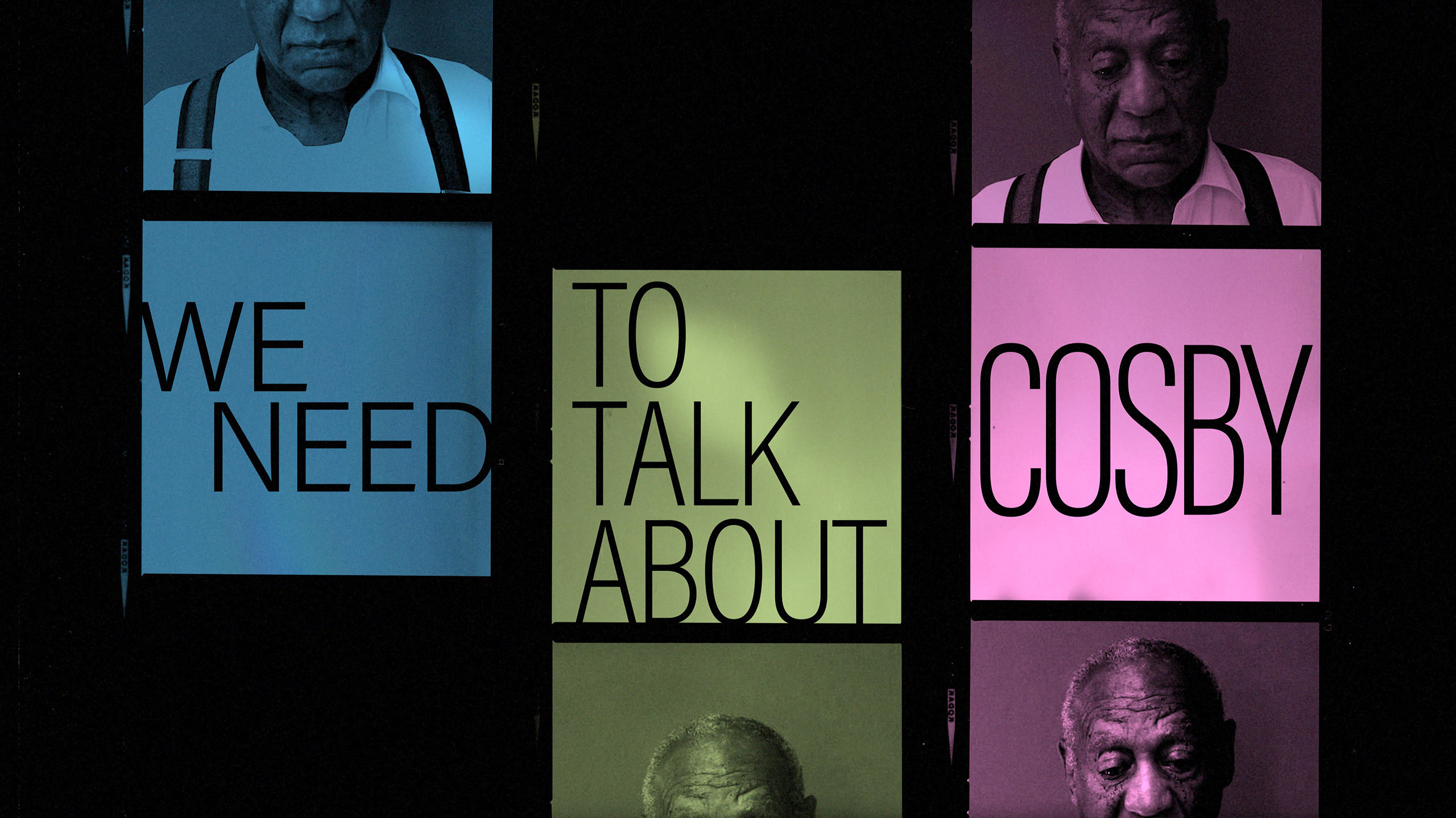 We Need to Talk About Cosby,” a four-part Showtime series from the director W. Kamau Bell, is documentary as collage, as editorial, as attempted community exorcism. In 2018, Bill Cosby was convicted and imprisoned for sexual assault, after sixty women came forward with allegations of abuse, drugging, and rape against the comedian. Bell’s documentary, which premièred at the end of January, comes seven months after Cosby’s conviction was overturned, owing to a legal technicality. This most recent development, which, in fiction, one would refer to as the twist, drapes Bell’s series in a kind of under-acknowledged despair. Valiantly, Bell seeks to puncture the esteem that Cosby still holds, and to convert those who are in denial about Cosby’s character, despite the fact that he has admitted—under oath—to drugging and assaulting women. The show pushes hard against the edifice of conspiracy that grounds thought and action and worship in America, and conspiracy presses its weight right back.

“It feels like we haven’t gotten to the root of the discussion,” Bell says, in his narration. Why is it so important to get to the root of the discussion about Cosby? Bell’s focus is distinct from the exposure of Cosby as a serial rapist. The documentary gives several survivors the space to detail their experiences at length, but the project is not a work of investigative journalism. Bell is looking to officialize the strong emotion that Cosby provokes in at least two generations of the fractured unit called Black America. The energy is that of a reckoning around the Race Man, the prismatic figure through which the notion of Black identity is formed. The Cosby of this show is a spectre, brushing up against every aspect of contemporary Black life for the past six decades. Bell has made an ambitious piece of Black media, addressed explicitly to a Black audience.

“I am a child of Bill Cosby,” he says, in voice-over. The director, who was born in the seventies, was weaned on Cosby’s animated kids’ programs “Fat Albert” and “Picture Pages,” before pursuing his own career in activist-y comedy. Bell bases much of his perspective on the strata of autobiography, though he does not apply the same treatment to Cosby. Bell’s Cosby springs into being fully formed, not as the resultant son of history, as Ezra Edelman constructed his subject in “O.J.: Made in America,” but as a unique colossus—a strapping, hubristic talent who could not be made by America but would remake America in his image. The first hour of the series covers Cosby’s meteoric rise to national prominence in the sixties, and the mood is nostalgic, jaunty. Working as a bartender in his home town of Philadelphia, the handsome collegiate charms patrons with his jokes. The kid makes it to the clubs in New York City, where he performs between folk acts, honing his suave observational comedy. A few years later, he’s a headliner; by the end of the decade, he’s crossed the color line in both television and film.

The broad strokes of Cosby’s early career are traced by a Greek chorus of journalists, academics, comedians, the rare former colleague, and survivors. With their help, Bell situates Cosby as an opportunistic genius who played the anxieties of white and Black America against each other, in the service of an initially “raceless” comedy. The entertainer was lauded for his circumvention of Black stereotypes. “He’s everything you don’t see in Black characters on television,” the Boston Globe editor Renée Graham says, when describing Cosby’s secret-agent character in “I Spy.” As the civil-rights era was ending, Cosby embraced his African American identity, growing out an Afro, and hosting specials about slavery. Then he pivoted to the embryonic paternalist whom he would perfect in the eighties. Posing on the cover of Ebony, with his wife and their children, Cosby planted the seeds for “The Cosby Show” and other family-friendly projects yet to come. A fealty encircled the entertainer, and kids began to adore him, to accept him as an educator, a moral authority. Cosby became synonymous with racial progress and uplift.

Occasionally, Bell will reach a juncture in the evolution of Cosby—say, the comedian’s role as the titular villain opposite Elliott Gould in the much pilloried 1981 film “The Devil and Max Devlin”—and wonder, What if the film had been a success, and Cosby had been typecast as demonic? Would he still have engendered the good will that allowed so many to defend him once the accusations finally took hold? It’s a kind of naïve magical thinking, fuelled by Bell’s crisis of fanhood and faith. His documentary seems motivated, in part, by a feeling of guilt that we all inadvertently provided an alibi for a bully who actually despised us.

It probably goes without saying that Cosby did not grant an interview for this project. Because the subject is unavailable as a reactive character, the drama of the show is fomented through the building of analysis. The series is especially strong when it dramatizes the concurrence of Cosby’s increasing prestige with accounts of his predatory behavior. Survivors dictate the narrative in these segments, but Bell does not identify the women as survivors when we meet them. They might be mistaken for cultural critics, and, in a way, that’s precisely what they are: experts on how fictional image and the power it provides can be leveraged to facilitate bad behavior. Their stories span half a century. Victoria Valentino, a former Playboy Playmate, describes Cosby drugging and assaulting her in the late sixties; Eden Tirl recounts being assaulted while she guest-starred on “The Cosby Show” in the eighties. Tirl’s testimony is punctuated with a clip of her on the show, playing a police officer.

“Bill Cosby, it seems to me, has been leaving something like bread crumbs all throughout his career, pointing to his guilty conscience,” Kierna Mayo, a former editor-in-chief of Ebony, says, in the series. Bell conducts a forensic examination of Cosby’s sets, books, and shows, for references to “Spanish Fly” and the like, in order to float the argument that Cosby, an emboldened agent, conflated the Heathcliff Huxtable character with Cosby the man, tainting us all with an inexorable Daddy complex. There is a hint of panic in these segments, which circle around the trite question “Can you separate the art from the artist?”

Bell inspects the falsities in the Cosby artistic myth. The comedian was known for his education, but his credentials were overblown: he received a bachelor’s degree despite never having finished college, and his doctoral thesis, based on “Fat Albert,” may have been ghostwritten. Meanwhile, “The Cosby Show,” canonized as the hinge point in so-called positive Black representation, was a well-written sitcom that doubled as conservative propaganda for the nuclear Black family unit. Still, Bell readily accepts the idea that Cosby was “America’s Dad,” even as he introduces perspectives that should complicate that assumption. The documentary includes a clip of Eddie Murphy performing standup in the eighties, during which he recalls Cosby chastising him for cursing onstage. Murphy complains to Richard Pryor, who retorts that he’d like to tell Cosby to “suck my dick.” Cosby may have been the Black comedian who “won” in the eyes of the mainstream, but it was hip-hop, Cosby’s nemesis, that won in Black America.

I’m no child of Cosby. I watched “The Cosby Show,” in syndication, when it was already a relic, and when Cosby’s reputation had long soured among the youth. Bell’s series falls short of questioning the systems of paternalism that endowed a serial rapist with so much institutional control. Sometimes its Black American audience is rendered as an impressionable bloc, pinging between the conspiracies of white supremacy and that of Black respectability politics.

“We Need to Talk About Cosby” is most compelling as an honest self-reflection of Bell himself, both as an artist and as a Black man invested in the betterment of his people. By the end, Bell is exhausted, seemingly ready to relent. “There were times when I was making this that I wanted to quit,” he admits. “I wanted to hold on to my memories of Bill Cosby before I knew about Bill Cosby. I guess I still can. As long as I admit, as long as we all admit, that there’s just a Bill Cosby we didn’t know.” Then what?