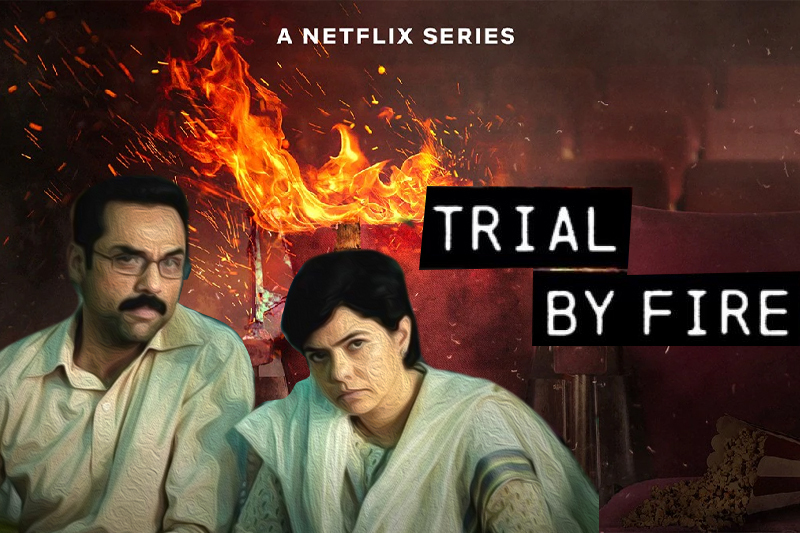 June 13, 1997. A devastating fire engulfed Uphaar, one of Delhi’s most popular cinema halls, claiming 59 lives. While struggling to make sense of how both their teenage children perished in the smoke-choked balcony, the doors to which were either blocked or locked, with no emergency lights, no alarm systems, and zero support from the staff who had fled the premises, Neelam and Shekhar Krishnamoorthy set about creating an organisation to help the victims of what came to be known as the Uphaar tragedy.

‘Trial By Fire’, the seven-part web series now streaming on Netflix, is based on the book of the same name written by the couple. The Hindi edition’s title ‘Agniparkeeksha’ aptly defines their indomitable courage which kept them going through their journey of trying to get justice for their children. And for the 57 others who died that afternoon, while watching J P Dutta’s war film ‘Border’, in a tragedy that was proved to be wholly preventable in a court of law.

The fire not only took away their children, 13-year-old Ujjwal, and 17-year-old Unnati, they had to undergo an ‘agnipareeksha’ every time they stepped up to call out the rich and the powerful — the police who refused to file an FIR for the longest time, the uncaring officials of the state, the owners of the theatre, Sushil and Gopal Ansal, ‘who own half of Delhi’, the big law firms who refused to touch the case. The enormous difficulties ordinary citizens have to face every step of the way when they embark upon such a path come in the form of outright, violent intimidation, apathy, and betrayal by those considered close, which is perhaps the worst cut. It’s all there in the series.

Showrunner Prashant Nair has also directed several episodes, along with co-directors Randeep Jha and Avani Deshpande, and Soumayananda Sahi has filmed the whole with urgency and immediacy: this is a series which does the important work of remembering unsung heroes, and documenting their endless, soul-sapping toil, for that is exactly what it is, for posterity. As a character in the series puts it, in a country where everything is forgotten so soon, it is remarkable how the press, both print and TV, kept following the Uphaar tragedy.

And that’s down to the remarkable spirit of Neelam and Shekhar, who kept rolling with the punches, and kept getting up and going. The couple realised, as most people do in their situation, that they could expect no help from anyone else, including the government and the billionaire builders who owned the theatre, and who were involved in the running of it. As one employee blurts out tellingly to another, while they are milling about uselessly while the fire rages on, and the manager tries to report the fire, 20 whole minutes after he learnt of it: Ansals ne kya kaha?

Rajshri Deshpande, her face a blur of incomprehension and dawning grief, and Abhay Deol, as the hurting spouse who continues to provide his wife rock-solid support, play the parents with such empathy that our hearts go out to them. How do you face each other when a birthday cake arrives on the doorstep, ordered ahead for your child who didn’t live to see the day? The hiding of it from each other, the inevitable discovery of it, the laying of the plates, the cutting of the slice, the shaky acknowledgement that it is terrible (a bilious green concoction with a red cricket ball and green field), and the comforting of each other, is all done in felt silence. And the impact that that day has on their marital life is laid out in their home becoming a battlefield, filled with a lifetime of mourning, mounting frustration, and, yes, a resilience which sees them through their darkest hours. It is, finally, a journey of hope and inspiration.

There are some niggles. From the small — in Delhi, it is called an auto, not a rickshaw — to the bigger, more dramatic threads clearly inserted to keep us engaged. The balcony doors being padlocked from the outside so that no one without a ticket could sneak in feels out of whack: the tickets are checked at the entrance of the theatre, and the usher guides you to the seat. Investigations showed that the one functional exit was locked or blocked, but for what reason?

There’s also a mysterious dry fruits exporter, played by Ashish Vidyarthi, who goes about threatening the victims and offering them cash inducements to stay away from AVUT (Association of the Victims of the Uphaar Tragedy). He is clearly a hitman-cum-fixer under the thumb of a firm which is in turn owned by the Ansals, and you wonder how much of his sinister character was true. Chase-scenes shot in crowded streets, minor characters up to no good mouthing ‘ma-behen gaalis’, all feel a tad filmi. But they are made up for by the way the AVUT meetings are held, with the participants going through a gamut of emotions, giving us glimpses into the enormity of their struggle, keeping things going for over half a century.

An episode, featuring an army man who missed out on being on the front in the 1971 war on which ‘Border’ was based, and his long-suffering wife, played by Anupam Kher and Ratna Pathak Shah, feels like a digression to start with. But a circling back to that fateful matinee show adds a layer. As does an episode in which the terrific Rajesh Tailang’s electricity board man is made a scapegoat: a glimpse of his wife reaching out for him in bed, makes these characters both real and relatable.

The disclaimer says that the series doesn’t make any claims of ‘authenticity or correctness of any events, or incidents’, and that it is a ‘work of fiction, inspired by the book, Trial Of Fire’. It has to. But there is, rightfully and thankfully, no shying away from naming names. Gopal and Sushil Ansal may still be the biggest names in the construction business, the charges against them may have been drastically reduced, they may have escaped serving their long sentence, but there is no missing the fact that they were brought to book. It was also their trial by fire, made a reality by Neelam and Shekhar, who have managed to start some ‘badlaav’, as opposed to ‘badla’, even though their fight for justice is far from over.

What stays with you is their dignity, despite the occasional, much-deserved outburst , all the more moving because of their quietness: the best part of the series is the steadiness it manages to instil even in the most sorrowful faces. No loud chest-beating hysteria, no sensationalising. Earlier in the week, the Ansals tried to stop the series from streaming. They failed, and it is out for all of us to watch. ‘Trial By Fire’ needed to have been made, so that nothing like this ever happens again, and that we do not forget.

I’ve never forgotten. I was in Uphaar that day for the 12 o clock show of ‘Border’, and went off to another film in another part of Delhi: for me, it was just another Friday with back-to-back films. By the time I got back, my phone was ringing off the hook, with frantic calls from colleagues who wanted to know if I was all right. I look back on that day and wonder what would have happened if I had flipped the movies, and been in Uphaar when the fire broke out.