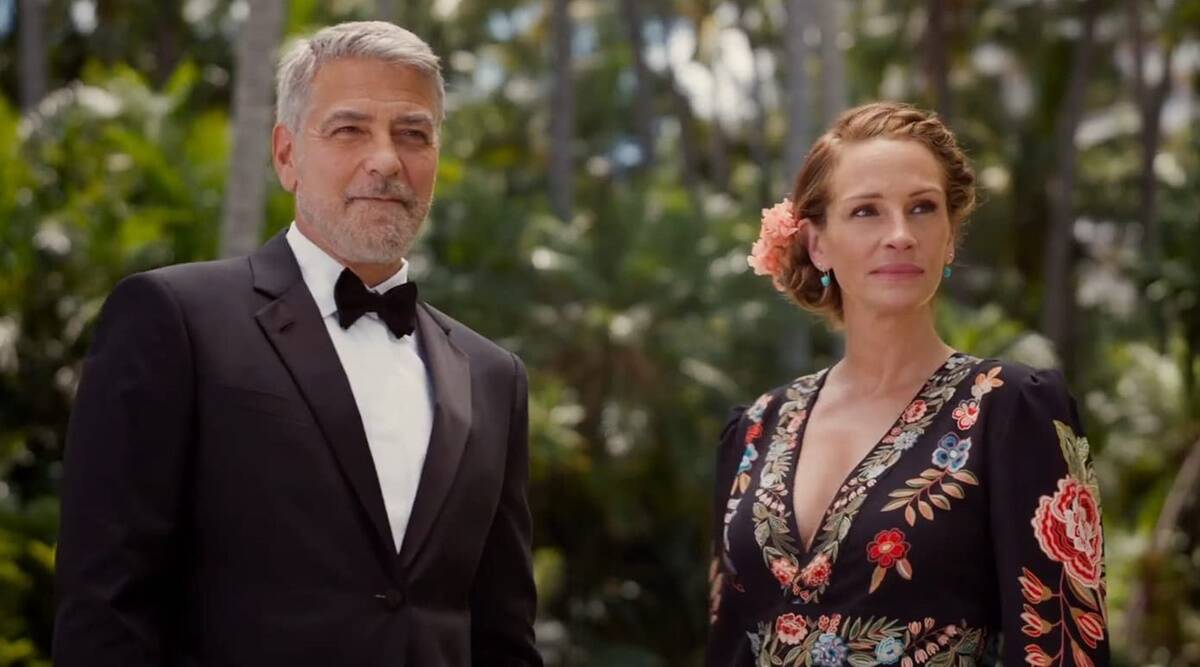 Ticket to Paradise is somehow already fading from my memory (I saw it two hours ago), but at one point, Kaitlyn Dever’s Bali vacationing Lily starts explaining why she loves local Gede (Maxime Bouttier), which rings false because the film doesn’t care to spend enough time building up their love and the drastic decisions that must be made stay together and get married. Lily is there with her bestie Wren (Billie Lourd), unwinding after graduating college, well on her way to becoming a lawyer, where she immediately falls for seaweed farmer Gede because he’s hot and shirtless and the picturesque island vistas.

Three months later, they are set to get married, inviting in Lily’s estranged and divorced parents, Georgia and David (Julia Roberts and George Clooney, who admittedly can pull off rom-com performances in their sleep and are charismatic here). When not incessantly bickering (which is often funny, especially during an airplane sequence), they are on the same sabotaging their daughter’s upcoming wedding.

The first problem with co-writer/director Ol Parker’s (collaborating with screenwriter Daniel Pipski) Ticket to Paradise is that even though Georgia and David are jaded and cynical jerks in the wrong, we also somewhat don’t want to see Lily throw away a promising career in favor of young love that may or may not last. That’s also nothing against young love, which can absolutely lead to a lifetime of happiness. The issue is that the script hasn’t set up that romance credibly and brought us on their side.

Instead, Ticket to Paradise is concerned with Georgia and David, which is somewhat fine considering Julia Roberts and George Clooney are the leads, but they don’t necessarily feel like they should be the movie’s center. Older people deserve love stories and romantic comedies, especially when two of the best to ever do it are attached to the project. They also do genuinely elicit laughter and smiles, but their characters are shoved to the forefront at the expense of not only another couple but an entire country and its supporting ensemble.

The Balinese are thinly-sketched characters without much to do aside from making weak jokes or expressing poorly written love. By the time Ticket to Paradise is incorporating their traditional customs into a wedding, it feels obligatory, hollow, and disingenuous, with no earnest interest in exploring this culture and its inhabitants. There are offputting gags involving characters bitten by dolphins and snakes that are not only tiredly cliché but come across as regressive in depicting the danger of exotic locales. Surely, comedy can be mined from the characters and situations, but that would also mean focusing more on anyone who isn’t white.

Perhaps some of this would be forgivable if the script at least got those characters right, but even that fails to convince. Currently, Georgia has a much younger pilot boyfriend named Paul (Lukas Bravo), who is well-meaning but also uncoordinated and a bit dimwitted. Nevertheless, it puts Georgia in a position to defend what David calls out as “age-inappropriate,” leaving one presuming that the script will eventually get around to making the point that Georgia does deserve to enjoy life with this younger man whether they get married or not.

Without getting into spoilers and specifics, the film discards that and quickly turns into a will they/won’t they get back together rom-com for the divorced couple, which is quite possibly the least engaging direction for Ticket to Paradise to take.

Every single relationship on display in Ticket to Paradise is bland and mismanaged, landing on a groan-worthy, unintentionally hilarious ending. But George Clooney and Julia Roberts still have effortless chemistry and offset some of these frustrations through pure entertainment value. Hopefully, the tickets are refundable.