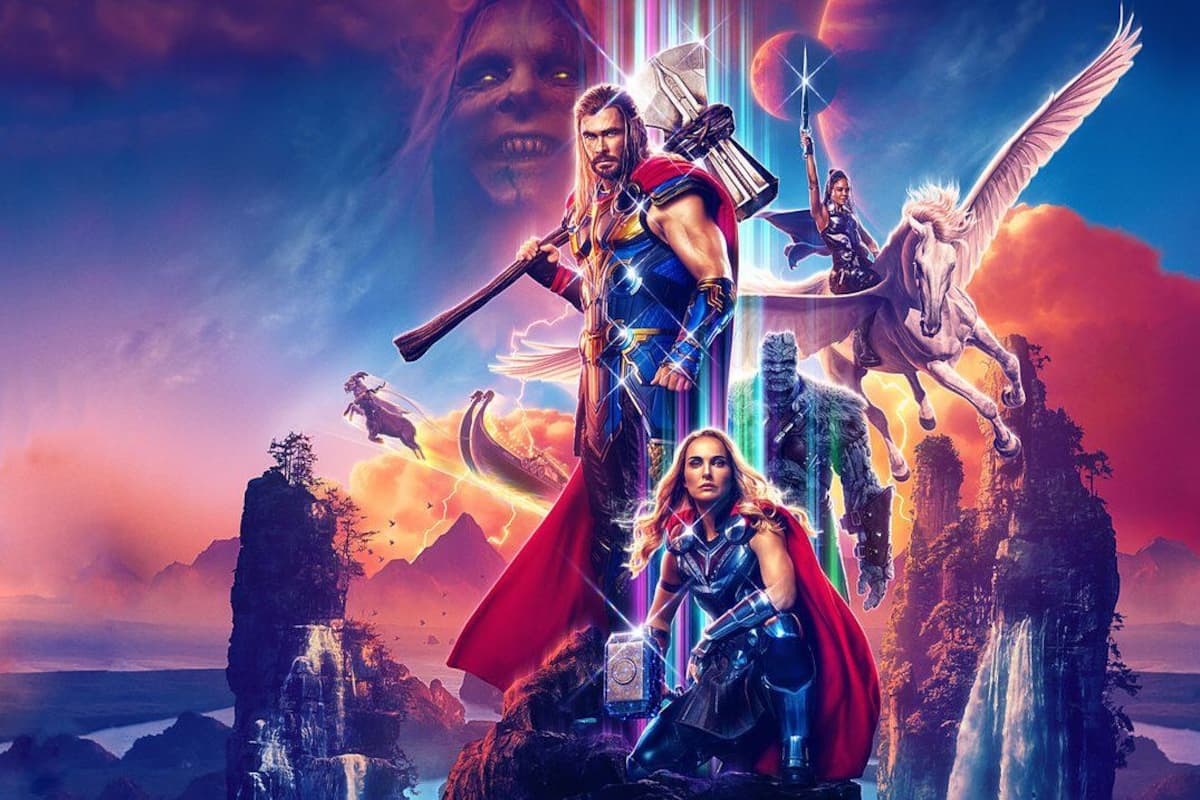 Thor: Love And Thunder charts a difficult course. A sequel which talks about the pain of revisiting past relationships, a story that tries to stand on its own but is the 29th film release in a cinematic universe, a tale that’s about one character (twice) and the responsibilities of power, not just those of our personally-trained protagonists but of creators.

Rooted in the minutiae of actual and comicbook mythology and the comic sensibilities of writer/director Taika Waititi, that journey is is fraught. Jojo Rabbit’s massive tonal shifts were in service of something intentionally shocking, leaving one hanging to leave one speechless. Here the tone veers between light entertainment and heavy Scandinavian drama, the (Lego-friendly) goat boat caught between Cilla and Cries And Whispers.

Waititi co-writes with Jennifer Kaytin Robinson. Her work includes works that draw from college campus conflicts, both internal and external, for MTV, HBOMax, and, soon, Netflix. The return of Natalie Portman as Dr Jane Foster and Tessa Thompson as King Valkyrie is tempered by their primary functions being as foils for Chris Hemsworth’s Thor and his struggles. Even the presence of Jaimie Alexander (Asgardian Warrior Sif) and Karen Gillan (Galaxy Guardian Nebula) doesn’t give us many chances for anyone not Thor to speak to anyone not Thor about anything other than Thor.

Apart from Christian Bale. Finding a space between David Bowie as Thomas Newton from The Man Who Fell To Earth and either Bengt Ekerot or William Sadler as Death, he appears to be in a different film entirely. His prologue is heart-wrenching, the loss of Love is paired with the revelation of Rapu, played by frequent Waititi collaborator Jonny Brugh. He is one of a number of gold clad figures whose fates seem not unreasonable in circumstance. Driven by revenge, Bale brings a different menace to this role than many of his others. He’s wielded weaponry before, from business cards to battle-axes, but even as Batman his command of shadows did not seem as sinister.

I mention another comic book movie because I think Thor: Love And Thunder has achieved something that matches its station as the 29th Marvel Cinematic Universe movie. It’s still, just, in theatres before moving to streaming, and there’s a litany of examples of comics remaining on shelves to complicate rights issues for commercial advantage. It’s not that though, but its tone.

This is ostensibly a Thor film but it relies heavily not only on previous Thor stories but the actions of Avengers: Endgame and the Guardians Of The Galaxy standalones. It quite accurately replicates the experience of reading a single story spread across multiple titles, the crossover events from the bad old days of multiple cover variants. All that’s missing is Wolverine, everything else is here.

That tonal inconsistency is what one might expect from two or three different writers telling parts of the same story in different titles. The stylistic inconsistency in terms of palette and palatability too. There’s been some mention made of criticisms made by Waititi of the quality of the effects work, and to be blunt that’s in keeping as well. Effects houses are often non-union, and there are dozens of CG firms credited.

There’s a joke in Deadpool 2 that’s made me, my primary filmgoing companion, and someone at the front left of the auditorium laugh, and nobody else. It was in reference to the artistic limitations of Rob Liefeld. There’s plenty of discussion of those online, but for whatever perceived faults, Liefeld delivered pages. That CG firms are underquoting, overworking, underpaying is massively in keeping with comics. It seems about once a week that I see a crowd funding appeal for a disenfranchised or ‘work for hire’ comics creator struggling with healthcare costs, and the digital revolution means we can exploit more artists more quickly in service of deadlines. Artists being replaced through a story-run is not uncommon but it does mean you get tonal shifts that are as stark as two sequential lines in this film that start with the word “Call”…

Gorr the God Butcher’s Kidnapped Children Puppet-time Story Moment feels at once the same and incredibly different than a Thanos-themed sweet shop. I’m not saying New Asgard is wrong to have a candy store whose design directly references one of the most staggering acts of (fictional) genocide, but usually my concern with them is that they’re probably money laundering, not reminding tourists of that time that half the galaxy’s population were killed and then restored, displaced in time, to lives that had moved on without them. It might be that under Charlie’s regime those who died on Chocolate Factory tours were hanged along its grand approach but at least one can imagine a tune that starts “Oompa Loompa Doompity Mallows”.

A desaturated shot lit by lightning recalled the inky splash of The Dark Knight Returns, Lynne Varley’s colour(s) vast across the page in the spaces where black was not. A fight sequence borrowed the speedy slowness of Snyder’s take on 300. A few moments made it seem like irony and artificiality and the desperate attempt to make a medium predicated upon the tastes of children into something serious and adult by stamping down on any childishness reminded me of, if not the letter, then The Spirit.

That I was reminded of three different singular visions isn’t accidental. This is clearly Waititi’s film, for what that’s worth. One inflected by the means of its making though, like that story in seven titles. I draw a contrast with Phil Tippet’s Mad God, also a familiar thing in comic books. One title, one artist, one story. Several decades, several methods, several publishers. Singularity and multiplicity of vision can both complicate things, the myopic and the mythic, the pantheon of the nickelodeon.

It’s not as fun as Thor: Ragnarok. It’s got most of the same weaknesses and slightly reduced versions of its strengths. It is perhaps a Spectre to that Skyfall. It has good moments, and some clunky ones. It carries you along but it veers as it does so. If it is a handbasket it is one upon which grip has been lost. Some of its artistic decisions are bold, the God of Dumplings might constitute Disney cross-promotion and the sight of Thor’s tattoos literally has some reaching for popcorn.

There’s a shot that’s (one assumes) deliberately reminiscent of Georges Melies Le Voyage Dans La Lune though it might be stealing from 1996’s music video for The Smashing Pumpkins’ Tonight, Tonight. Borrowing from the wrong borrowings is the death of Star Wars and in places this feels as similarly tapped out as latter outings in that cycle. One could add a note about Game Of Thrones here but its current outing is literally an incestuous prequel and so there’s no point in dragging it out.

We’ve got much the same cameos as before, many of the same references, half a hundred moments you might notice and will definitely depending on your YouTube recommendations. At nearly two hours it clips along but it drags in places and soars in others. It’s worth it for Bale, but his shoulders have carried plenty of other, better, movies. This might be the most Taika Waititi a movie has ever been, lazy reliance on jokes about fatness and winking queer-coding to polarise too. It wanders from Yggrasil to Wyld Stallyns and back. The least explicable thing is that Russel Crowe had a dialect coach.

It has scenes after and within the credits, which I stayed to watch which is why I know that at least three people were involved in Zeus’ idiosyncratic intonations. It’s yet another tonal shift though in a film whose attempts to be sericomic more accurately reflect the foibles of serialised comics. I never met a text I couldn’t find a way to analyse, but this feels far more of business than show, or, at least more a merchandising rather than mythologising opportunity.

Yet there’s still that line, about revenge, duty, that cake and eat it counterpunch of complaining about going back and trying to move on and keeping things the same in a third sequel. It entertains, but doesn’t compel, except when it does both and neither. It has levity and gravity but not brevity, its lightness undermines its heaviness and weightiness. It is as if at the end of The Seventh Seal there was an eighth with a brightly coloured ball balanced upon its nose.