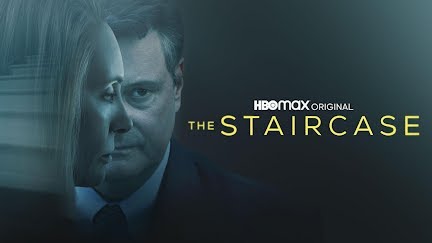 Many of us have seen The Staircase before. Specifically, we saw it in the form of the 2004 docuseries that tracked the complicated murder case against Michael Peterson, a North Carolina writer accused of killing his wife, Kathleen. That version of The Staircase was a foundational work of modern true-crime television, providing unusually intimate access to the accused and capturing wild twist after wild twist. It spawned a sequel in 2013 and three additional installments commissioned by Netflix in 2018. Without The Staircase, one could argue, shows like The Jinx and Making a Murderer might never have existed.

But The Staircase, which casts Colin Firth in the role of Michael and Toni Collette as Kathleen, defies expectations, adding new perspective and dimension to a well-known story while creating an experience that differs from the docuseries. Where the original focused on Michael’s journey and the nitty-gritty legal maneuverings in his case, this iteration widens its canvas enough to register as both a crime drama and a family drama. Perhaps more important, The Staircase enables the audience to see Kathleen as a full human being who once lived a rich, not entirely fulfilling life as opposed to a victim whose body becomes yet another piece of evidence in court.

Showrunners Maggie Cohn and Antonio Campos include a notable aspect of the story that the original, for obvious reasons, could not, casting some of the makers of the documentary as characters. That gives this series the opportunity to interrogate how true crime itself shapes opinion by nudging the audience’s sympathies in one direction or another. In part, this is a limited series about the making of a docuseries and the inevitable biases that arise from being so closely embedded with a man who insists he’s innocent even though certain details don’t square with that assertion.

Certainly The Staircase revisits material that is familiar, sometimes recreating scenes from the documentary shot for shot. Once again, for example, Mike leads the film crew on a tour of his lovely, spacious home to retrace the events of December 9, 2001, the night Kathleen died after enjoying some wine by the pool with her husband and then heading back inside. Michael contends he came back in the house roughly a half-hour later to find his wife lying at the bottom of some stairs, having taken a rough fall. But the amount of blood at the scene and the ensuing discovery of lacerations on Kathleen’s scalp, among other things, suggest her husband may have directly caused her death. The one thing that cannot be denied is the only people who know exactly what happened are Michael, who may not be trustworthy, and Kathleen, who’s no longer able to speak for herself.

Flashbacks to events prior to that December shed more light on who Kathleen was, presumably with a few dashes of artistic license. As portrayed here, she’s an executive at Nortel who’s stressed about layoffs at the company in the months before her death as well as a mother accustomed to playing the primary caregiving role for her extended brood. Together, she and Michael have five children — two sons from his previous marriage, Clayton (Dane DeHaan) and Todd (Patrick Schwarzenegger); a daughter from hers, Caitlin (Olivia DeJonge); and two daughters, Margaret (Sophie Turner) and Martha (Odessa Young), whom Michael adopted after they lost both of their birth parents. Kathleen strives to be the glue between them and the woman who has it all, but it’s obvious how badly she needs to soften her edges with wine and pills. As played by Collette, she always seems slightly rattled but also radiates real warmth that makes it obvious why others want to be in her presence. The sense of loss following her death resonates much more than it does in the docuseries.

While other Peterson family members appeared in the first Staircase, this one spends more time exploring the dynamics between the Peterson kids and the extended family, particularly Kathleen’s sisters, Candace (Rosemarie DeWitt) and Lori (Maria Dizzia), who become increasingly convinced Michael took their sibling from them. Slowly, beneath what looks at first like a happy, stitched-together family, the show reveals rifts and resentments, hidden lacerations of another kind.

The focus on character development, not usually a hallmark of true crime, extends to every person touched by this case, including Peterson’s attorney, David Rudolf, a role handled authoritatively by Michael Stuhlbarg, and prosecutors Jim Hardin (Cullen Moss) and Freda Black, played with quiet command by Parker Posey, who nails her North Carolina drawl. (Someone give Posey her own series about a progressive attorney fighting for justice in the South, please.) No one in this series is one-dimensional or easily reduced to hero or villain.

That applies to no one more than Firth, who rises to the challenge of becoming Michael Peterson by adopting his matter-of-fact and elevated manner of speaking with great precision. As is noted in the original Staircase, Michael is openly bisexual, and that is explored with greater sensitivity and detail here, making his sexual orientation another piece of an intricate puzzle as opposed to a hint that that he’s a deviant. While Firth effectively captures Michael’s mood swings and flashes of anger, he doesn’t quite match the real Peterson’s odd vibes; he does connect completely, though, with Peterson’s low-key arrogance and ongoing love affair with the sound of his own voice.

The procedural aspects of the story are still fully represented (for those wondering, the first five episodes provided to critics suggest that, yes, the owl theory will be covered), making for an occasionally grisly viewing experience; upsetting autopsy photos and discussions of blood spatters could make The Staircase a tough sit for the squeamish. But nothing here feels gratuitous. Campos and Cohn are ultimately most interested in the truth, how it can be manipulated, and the ripple effects those manipulations can have on the members of a family for years. Is the riddle of Michael Peterson or this case solved by the end of this Staircase? Probably not. But the perspectives and narrative pathways explored in this limited series prove that the story of Michael and Kathleen Peterson remains compelling no matter how many times you’ve seen or heard it.