The Most Beautiful Flower 2022 Tv Series Review and Trailer 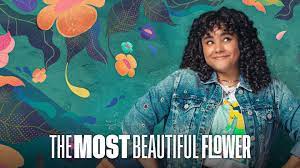 The Gist: In a fun montage, Mich (Esmeralda Soto) shows that she’s popular, sings, dances, and has the most popular guy in class as her boyfriend. Then she wakes up. “Okay, I’m not all that yet,” she tells the camera with a smile. “But I’m almost there.”

Mich is definitely confident, and loves herself. But she’s invisible once she gets to school. She lives in the canal-filled borough of Xochimilco in Mexico City, and once she rows her boat over to the school and locks up her oar, the only people she hangs out with are her buddies Yadi (Isabel Yudice) and Tania (Alicia Vélez), who both feel like they’re “no one” in the school.

But Mich has a plan to up her visibility, and it starts with revealing to the public that she actually is dating the most popular boy in school, Dani (Germán Bracco). They’ve been keeping things on the down-low for a year, but he promised her that they’d go public at the 1-year mark, which is coming up. She plans on marching to the fountain in the courtyard, where all the cool kids sit, and announce that she and Dani are dating. But Yadi and Tania warn her that the last non-cool person who approached the fountain got pushed into the murky water, never to be seen again.

When she goes to the fountain to talk to Dani the next day, everyone there, including Dani and her popular cousin Brenda (Michelle Olvera), pretends not to know who she is. Even the principal guesses her name wrong. Brenda pulls Mich aside and tells her she gave Mich the superpower of invisibility. But after a talk with her stepfather Fer (Luis Fernando Peña), she’s convinced that being different is her actual superpower.

Empowered, Mich announces to the school that she wants all of the invisible people to raid the fountain with her, and even creates flyers to post around the school. When she goes to the print shop to make copies, she runs into the owner’s grandson Mati (Tadeo Tovar), whom she last saw when they were both kids. Now he’s tall and handsome, and is a DJ. She breaks things off with Dani and then goes to sit at the fountain; Brenda tells her buddies to push her in, but Mich gets the recognition she feels she deserves.