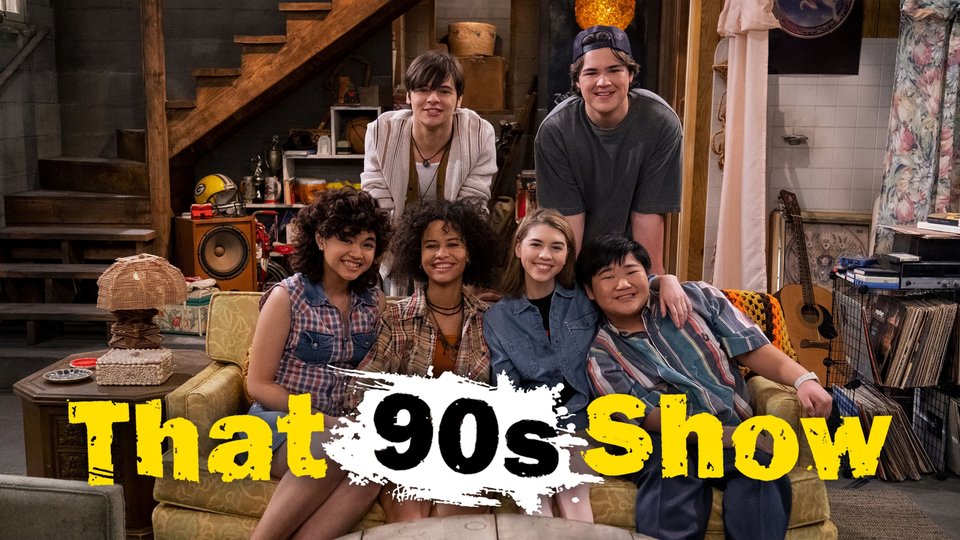 There are a few quibbles one might make about “That ‘90s Show,” the first of which announces itself somewhat plainly. There’s little of the grain or texture of 1990s culture in the series’ first episodes: Indeed, protagonist Leia Forman (Callie Haverda) lives out an experience of teenagerdom not dissimilar to the one shared by her parents (Topher Grace and Laura Prepon) on Fox’s “That ‘70s Show.”

But that seems like the big point this series, which boasts a number of executive producers from its predecessor, is working toward: The more time passes, the clearer it is that dynamics and fundamentals are resistant to change. That’s true of the relationships between characters: Grace and Prepon are but guest stars, dropping off their daughter to spend the summer with her grandparents (Debra Jo Rupp and Kurtwood Smith), but both actors conjure, effectively, the sense of instant regression to teenhood that happens when visiting parents in adulthood. And it’s true of the ways teens spend time: Though they’re watching “Clerks” instead of “Star Wars,” and though one of the crew (the gifted Reyn Doi) is openly gay, they’re ultimately all still hanging out in someone’s basement, killing time.

Which lends “That ‘90s Show” an amiable hang-out energy, far removed from the antic desperation of a “Fuller House,” the standard-bearer for trying to force a reboot of a show that needed no real continuation. Nods to the history of the franchise here can fall flat. Grace and Prepon are needed in order to set up the action of the series, in which a brief visit to the Wisconsin homestead results in Leia wanting to hang out with the locals for a summer, and they do fine. A cameo by Mila Kunis and Ashton Kutcher feels more obligatory, and Wilmer Valderrama’s appearance as the caricaturish Fez reminded this viewer of aspects of the original series that, speaking frankly, might have been better left in the past.

Inasmuch as “That ‘90s Show” succeeds, it does so by establishing a warm and sunny central dynamic among its new central cast of teens. (It does so to such an extent that we can forget that the central characters are, in fact, part of Generation X, but never mind that.) Rupp and Smith, now playing grandparents, are sufficient tie to the forerunner series; indeed, given the relative lack of a “Friends”-style second life for “That ‘70s Show,” it’s not hard to imagine this show’s core audience being a group of Zillennials meeting these characters for the first time.

What will they take from it? If “That ‘90s Show” lacks the painfully stilted energy of “Fuller House,” it also doesn’t have the antic urge to reinvent that characterized the recent “Saved by the Bell” reboot. (That show’s comic density and curiosity about how its format could be stretched made it feel truly new.) In a funny quirk of time’s passage catching up with subject matter, “That ‘90s Show,” some twenty-plus years after the launch of “That ‘70s Show,” looks a lot like… a show from the 1990s. For older viewers, its format as well as storylines may well conjure nostalgia. For younger ones, I wonder if its sitcom-y rhythms, the way each episode builds around a conflict resolvable in 22 minutes and makes time for an applause-ready cameo, will suit.

If it is to go on, the show’s success will hinge on what it brings us from the game, appealing Haverda as Leia and from the performers playing her friends — on what stories the show can tell distinct from just reliving the glories of “That ‘70s Show’s” initial run. Some things are eternal, but it can be nice to infuse an old story with some new spirit.