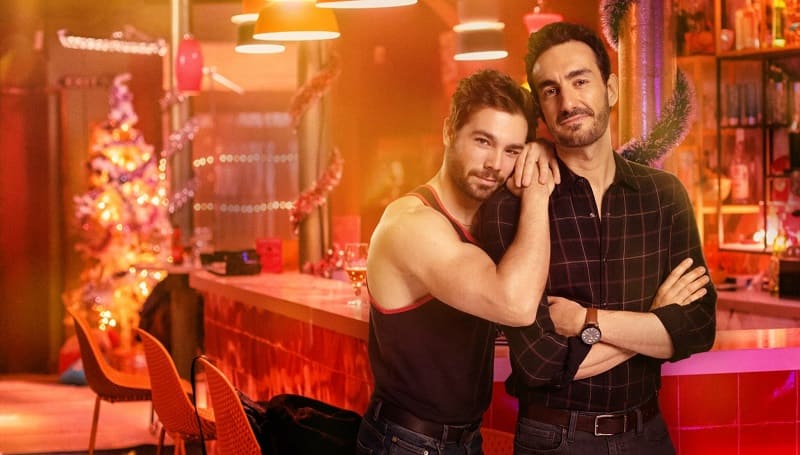 Àlex (Carlos Cuevas) is a bartender in Barcelona, and he’s leaving an epically long message to his ex, several weeks after being ghosted by him. The message is full of talk about how he thought their relationship would be different, how he thought that the two of them had a connection and a real shot at something special. He also explains how the last thing that he texted to him in WhatsApp is a smiley emoji, which says a whole number of things.

One problem: Since he called the phone from the landline of the bar where he works, he actually had to dial the number. He ended up dialing the wrong number; instead of the ex, the epic voice mail lands in the inbox of an architect named Bruno (Miki Esparbé). Bruno is also looking for something real and lasting, and he’s been on the dating scene for what he feels like is way too long. He even ends up deleting Grindr, especially after some of the guys he matches with basically tell him to get lost.

He’s seriously thinking of returning the call and trying to meet Àlex. His best friend Albert (Eduardo Lloveras) and his wife Núria (Ruth Llopis) think he’s crazy. But when he takes the chance and calls Àlex at the bar, the two of them have a great conversation and decide to meet there.

In the meantime, Àlex’s friend Vero (Meritxell Calvo), who reminds him that he’s dated a parade of assholes with great abs, has her own issues: Her girlfriend Patri (Giannina Fruttero) is getting their new condo in shape and is really looking forward to their new phase in life. But Vero got a job offer to manage a club in Ibiza over the summer, something that also ticks off Javier (Pepón Nieto), who owns the bar with her. But when he performs as his drag persona Keena, he inadvertently lets the cat out of the bag… with Patri sitting in the crowd.

One of the reasons why we cited those two shows above is because Smiley is about a relationship that starts off in a surprising way and has the potential to have really interesting ups and downs as the season goes on. You can tell from the first minutes of the episode that, while it feels like Bruno and Àlex are having a streaming-TV-ready meet-cute, the end of the episode shows us that the meet-cute is going to lead to a whole lot of emotional upheaval.

Why? Because when Àlex sees Bruno walking into the door at Bar Bero (so named because Vero convinced Javier to convert it from a barber shop into a bar), he says “Shit,” and not in a good way. He’s probably not attracted to Bruno at first, but he also knows in the back of his mind that the guys he’s been instantly attracted to have been the parade of assholes Vero talked to him about. So just the moments where the two guys get to know each other, with Àlex likely trying to figure out whether he should give Bruno a chance will make for some funny and romantic moments.

But writer Guillem Clua has done a good job of setting up the side characters with their own solid B-stories. We have Albert and Núria’s battle to get back some of the crumbs of fun they had before kids — Albert admits to Bruno that he jerks off in his bedroom while his kids watch Dora The Explorer. And Vero and Patri have a lot to work out after Javier accidentally let word of Vero’s new job on Ibiza slip out. The first episode covers a lot of territory, and we’re really interested to see where all of these relationships go during the season.