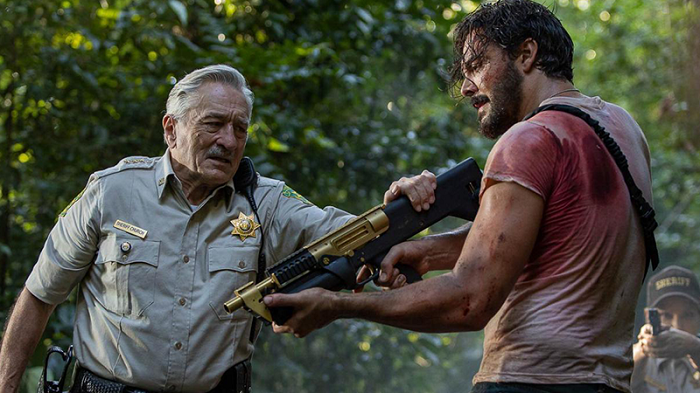 Robert De Niro plays a small town sheriff in the upcoming crime/revenge thriller “Savage Salvation”. Peculiar title aside, the story looks to cover a lot of familiar crime movie territory. But interesting casting and some potentially good action may make this a pretty fun and gritty feature. It’s directed by Randall Emmett who’s recently been best known for producing the recent wave of direct-to-VOD Bruce Willis movies. Hopefully “Savage Salvation” has a little more to offer.

The trailer sets the story up like this: a former addict named Shelby (played by Jack Huston) is devastated when his fiancé (Willa Fitzgerald) loses her battle to get clean and dies of a heroin overdose. Furious and seeking revenge, Shelby sets out to pay back the drug dealers who supplied her. With the bodies stacking up, a sympathetic sheriff (De Niro) seeks to help Shelby before he takes things too far. Again, several familiar elements to the story, and some of the action looks a little cheap. But hopefully there’s a good enough to story to make it all worthwhile viewing.

“Savage Salvation” opens December 2nd in select theaters and on VOD. Check out the trailer below and let me know if you’ll be seeing it or taking a pass.