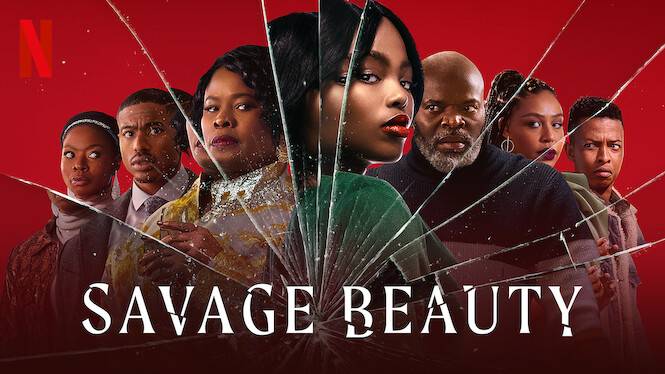 In the wake of the overwhelming success of popular series Blood & Water, Netflix’s catalog of original African television and film content has expanded significantly, with the streamer pumping out fresh new projects from the continent every month. The latest series to keep us glued to our screens is Savage Beauty, a gripping South African revenge drama with an important message that we can’t afford to miss.
Savage Beauty’s fast-paced plot takes place in the lively city of Johannesburg, where the exorbitantly wealthy Bhengu family lives lavishly in their sprawling private estate. Here, founder and CEO Don Bhengu (Dumisani Mbebe) and his minions family plot and scheme the next big steps for their company, Bhengu Beauty. For years, the cosmetics conglomerate has been supplying South Africa with beauty products aimed at celebrating beauty in all of its shades — to everyone’s knowledge, at least. Unbeknownst to their loyal customers (and to the South African government), Bhengu Beauty’s true corporate agenda isn’t actually all that noble. Alongside their daily duties at their cosmetics brand, there is a shady business dealing that really keeps the company afloat: the manufacturing and distribution of skin bleaching products. Even though South African officially banned the importation, manufacture and sale of cosmetic skin lighteners in 1990, the production of the products has persisted, and Bhengus are the country’s top producer of the toxic contraband. Their plans to expand Bhengu Beauty further are supported by the profits of the sale of the illicit bleaching creams, which were actually the first products developed in secret by Don and his ambitious first wife and co-conspirator, Grace (Nthati Moshesh).

Enter Zinhle (Rosemary Zimu), the new face of the growing company. Zinhle was selected by a public vote to be a Bhengu Beauty ambassador, granting her access to their network as well as a front row seat to the familial chaos that goes on behind the scenes. She may look the part of the young upstart who’s just grateful for the opportunity, but there’s an ulterior motive to her partnership with the company that’s driven by childhood trauma caused by the Bhengus. When she was just a child living on the streets of the township of Soweto, Zinhle and her siblings were forced to become the first test subjects of the developing Bhengu bleaching products. Unsurprisingly, the side effects of the testing on the children were more than skin deep, far more critical than the dark scars on their bodies; after years of chronic illness, Zinhle’s sister eventually succumbed to the toxins of the products and died.

Driven by unresolved grief and rage, Zinhle comes up with a meticulous plan to infiltrate the Bhengus’ personal and professional lives and expose their hidden business. But bringing down the most influential family in the country isn’t easy, and even as she works against the people who ruined her life, our heroine finds her soul being tainted by the quest for revenge.

With just six episodes in its first season, Savage Beauty is a quick but thrilling watch from start to finish. It’s got everything that a good drama needs — sex, secrets, and scandal — and does it all through an authentic South African lens. But the Netflix series isn’t just entertainment and mess. Important and socially relevant discourse is threaded into the plot, touching on a problem that’s plagued South Africa, the rest of the continent, and the diaspora at large for centuries: colorism and the ways that the cosmetics industry propels it.

Colorism has existed for centuries, with communities across the globe exalting lighter-skin as the gold standard for beauty and more devastatingly, as a prerequisite for humanity. As a result, people born with more melanin have typically been conditioned to believe that they are less than. Cosmetic companies recognize the high stakes of colorism and know that many people are willing to resort to extreme measures to even the score, and so they prey on those marginalized by this bias by mass producing products that promise to “lighten” the skin. (Note: “lightening” and “brightening” products don’t do the same thing.) These products, which are often produced in the form of creams, soaps, and even pills, are filled with dangerous chemicals like hydroquinone and mercury that can be harmful when used extensively; they’re known to cause health issues ranging from steroid acne and dermatitis to mercury poisoning and permanent kidney damage. Despite these serious side effects, companies continue to sell them en masse because they know that they’ll always be in demand as millions of people attempt to find a solution that brings them closer to their desired aesthetic.

In recent years, other countries have joined South Africa in the fight against skin bleaching; Rwanda, Ghana, Japan, Australia, and Canada are just some of the countries that have put serious regulations in place to ensure that the cosmetics industry is being more mindful about its product formulations. However, even with the fines and the bans on blatant usage of verbiage that advertises skin lightening, the products are still being sold around the globe, peddled by celebrities like Blac Chyna and Dencia. Savage Beauty is based on this sad reality in which the almighty dollar holds more weight than the physical, emotional, and cultural trauma that comes with cosmetic bleaching.

From its double-crossing, revenge-driven heroine to its secret sapphic love affair, Savage Beauty is a soap opera that doesn’t hold back. But more importantly than the telenovela-level drama of it all, the show is also a reminder of the insidious role that capitalism plays in the pervasiveness of colorism and anti-Blackness generation after generation. Like so many of the Netflix projects to come out of Africa in recent years (ie. corruption and abuse of power in Blood & Water, financial illiteracy in The Smart Money Woman), the series speaks to a real social problem that we can’t afford to downplay and shines a light on the culprits responsible for perpetuating it. Hopefully, Netflix will give the show a second season to keep entertaining and educating us (and to explain exactly what happened to Don at the end of the season finale).