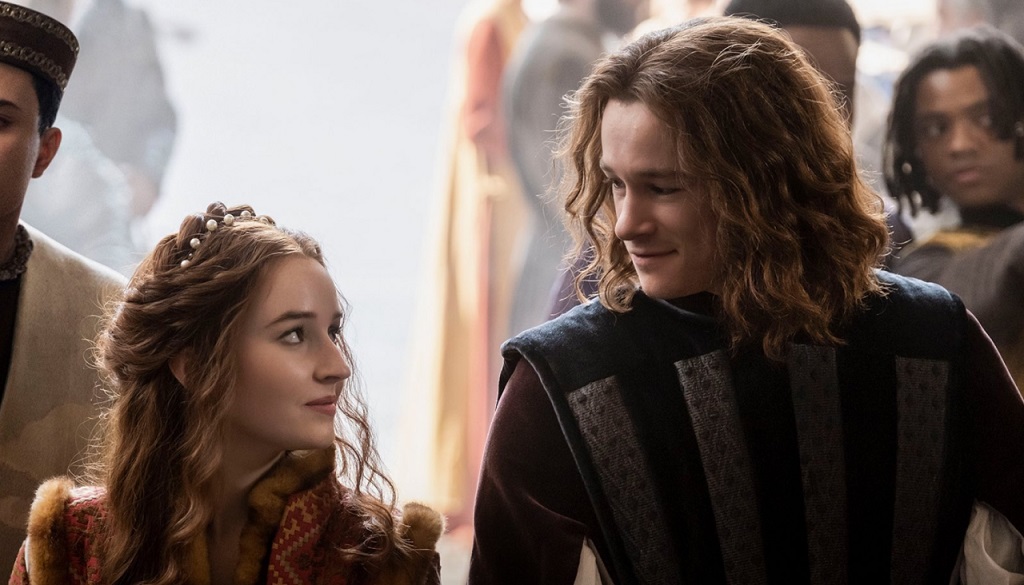 Rosaline is a smart and refreshing modern twist on an iconic Shakespeare tale. The film is a unique and easily entertaining romantic comedy that makes the story of Romeo and Juliet so much more fun. Kaitlyn Dever is absolutely hilarious as she shines the spotlight as the charming and sarcastic young woman who originally captured Romeo’s heart before Juliet. Rosaline is funny, dramatic, and relatable that uses 21st-century language and personalities while borrowing elements from the fictionalized story. The film is well-casted with a top-notch soundtrack and visuals.

Inspired by Rebecca Serle’s modern retelling 2013 novel, Rosaline takes place in Verona, Italy during the 14th century. The opening scene reveals that Romeo (Kyle Allen) and Rosaline (Dever) are already in love as he arrives at her bedroom’s second-floor balcony during the evening. The romance between the two characters must be kept a secret due to Romeo being a Montague and Rosaline being a Capulet. Romeo ensures Rosaline that he’ll find a way to make it work between the two families so that they can spend the rest of their lives together.

The next morning Rosaline’s nurse (Minnie Driver) walks into the bedroom as Rosaline wakes up from having a “late night.” The nurse is already aware of the secret romance between Romeo and Rosaline and warns her that she needs to be more careful with spending time with Romeo. Rosaline’s father (Bradley Whitford) has been working to find the right man for Rosaline as he tries to plan an arranged marriage for her. Rosaline tries to convince her father that she doesn’t want to get married while at the same time not revealing her love for Romeo. Rosaline is deeply in love with Romeo and doesn’t want to spend the rest of her life with another man.

Rosaline and Paris (Spencer Rayshon Stevenson) arrive at the courtyard where Romeo is also present as he is blending in with the large coward of people. Romeo and Rosaline have a moment where they are able to touch hands until Rosaline’s cousin, Tybalt (Alistair Toovey), sees Romeo and threatens to fight him. Romeo and his friend Mercutio (H. Hunter Hall) have a brief sword fight with Tybalt and his posse just before Rosaline steps in and stops them. Rosaline then reveals to Paris that Romeo is secretly her boyfriend.

Back at Rosaline’s balcony later that night, Romeo presents her with a necklace that he carved their names in. Rosaline then asks Romeo to attend a Capulet masquerade ball, so that they can dance in public together while hiding their identities under their masks. The next morning Rosaline’s father inconveniently invites Dario Penza (Sean Tale) to spend time with her in hopes that his plan for an arranged marriage will come together. They both reveal that they don’t agree on the arranged marriage with each other but must do so in order to please their families. While Rosaline is stuck on a small boat with Dario, Romeo arrives at the masquerade ball.

As Romeo searches for Rosaline throughout the entire masquerade ball, he accidentally bumps into Juliet (Isabela Merced). While it’s “love at first sight” between the two characters, Rosaline arrives too late, and the masquerade ball has already ended. Rosaline decides to write a letter to Romeo to explain herself for not being present at the ball and waits for his reply from Steve the Courier (Nico Hiraga). Some time passes on as Rosaline begins to worry that Romeo might be upset since he is not replying to her letters. Paris notifies Rosaline that Romeo is in the area and expects him to arrive at her balcony.

However, Rosaline watches Romeo take an unusual route away from her balcony and decides to follow him. As Rosaline continues to follow Romeo, they end up arriving at Juliet’s balcony where she secretly watches them have an intimate moment. The next day the miserable Rosaline is lying in bed and is encouraged by her nurse to get out of bed and start the day. Rosaline heads downstairs where she greets her Uncle Lord Capulet (Christopher McDonald), Aunt Lady Capulet (Mercedes Colon), and Tybalt. Lady Capulet reveals that their daughter has just returned home after being away for school, which also happens to be Juliet.

The reunion is awkward as expected since Rosaline is aware that Romeo and Juliet are now together while Juliet has no idea that Rosaline was previously in love with him. Rosaline comes up with a plan to break up the newly in love couple by convincing Juliet that Romeo is not the person she thinks he is. As everything seems to be going according to plan, Juliet finds out about Rosaline’s true intentions and escapes her home to be with Romeo. Realizing that she ran away, Rosaline and Dario decide to go into the dark forest together and search for Juliet. After a failed attempt to locate her, Rosaline heads back home where she then realizes that it’s probably for the best for Romeo and Juliet to be together.

The next day at the courtyard, Tybalt is killed by Romeo as he claims it was self-defense. Lord Montague and Lord Capulet announce that they are now at war. Rosaline and Dario come together to develop a plan for Romeo and Juliet to escape Verona by boat. Ultimately, Romeo and Juliet both fake their deaths in order for Rosaline and Dario to smuggle them to the boat docks. Due to the deaths of their children, Lord Montague and Lord Capulet decide to end their war once and for all, while Romeo and Juliet sail away to their new home in Cyprus.

Although Rosaline isn’t technically in Romeo and Juliet, her name is mentioned more than once in the iconic tragedy tale. Rosaline’s name is actually mentioned 10 times in Shakespeare’s play and also had an impact on Romeo just before setting his eyes on Juliet for the very first time. While some might be against the modern twist and extra flair on the classic love story, the film itself makes it more accessible to present-day audiences. Dever pulls off an impressive performance in the comedy realm, while Rosaline places the most forgotten Shakespeare characters up front and center. The plot perfectly fits Rosaline into the story while still implementing the classic moments from the original tale.