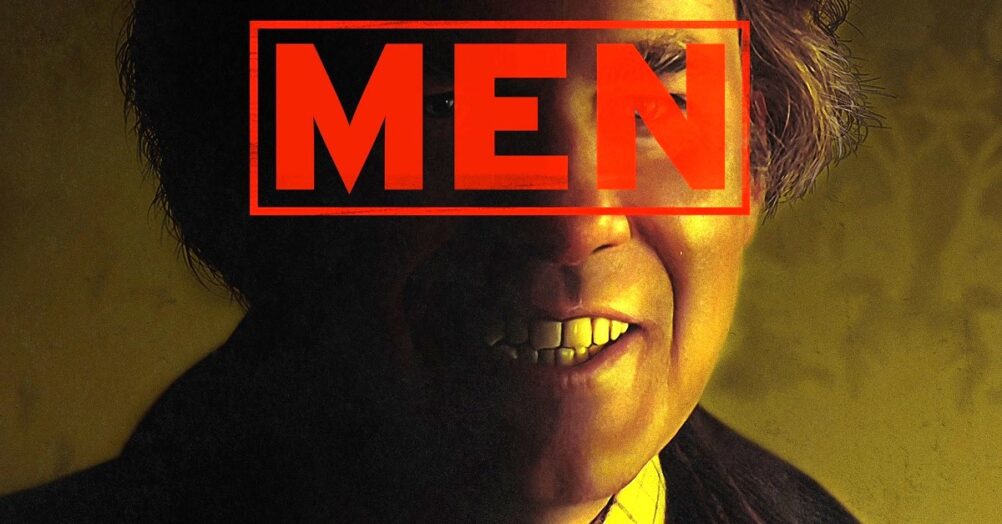 Harper (Buckley) stands in a room bathed in orange light, and is jolted to movement by what initially seems to be a soundtrack cue. She’s actually seen a man fall past her apartment window, a man we’ll soon learn is her husband James (Paapa Essiedu). We’ll return to this scenario. It’s a flashback, with the present finding Harper venturing to a 500-year-old house deep in the countryside for two weeks away from London. The home’s caretaker is Geoffrey (Rory Kinnear), a warm, eccentric gent, who gives her a tour of the place. There’s an old church over there, and nearby, a pub, and he lives just over yonder. He hands her the key and says you don’t really have to lock your doors around here, which sounds less like folksy charm, more like a terrible ironic warning.

Back to the orange room. She and James quarrel. She wants a divorce, and he threatens to kill himself if she goes ahead with it. He’s impossible. Strange, how she seemed to lock eyes with him as he passed the window. Now we know why she’s getting away, taking long walks through a beautiful mossy forest which, in a certain light, becomes menacing. She follows a path down a hill to another path and finds a lengthy tunnel, dark, but with a spot of light at the end. Her staccato shout echoes through it many times. Delighted, she layers more musical tones on the sound loops. And then a shadow at the end of the tunnel stands and walks toward her and chases her and we’re worried she’ll get lost in the woods but she appears to have lost her pursuer and she comes upon an old abandoned house next to a field, a thankfully empty field, and when she turns to photograph the house a naked man with yellowed skin stands next to it.

Another flashback, to the James scene. Then we’re relieved to see Harper relaxing in the bathtub of the old house, safe and sound for now. She plays the piano. She opens her laptop and does some work. She calls her friend Riley (Gayle Rankin). There are further… incidents? Happenings? Hallucinations? I’m not sure. They happen in the church and the pub and the house and we get the impression that it’s not the places that are haunted. No, she’s haunted.

Dream logic drives Men into outright madness by the third act, which is quite the horror show, Garland attempting to sear his nightmarish imagery into our poor, hapless memories. The intensity with which it plays out leaves an indelible impression, invoking enough repulsive, visceral terror to distract us from our desire for a logical explanation for all this, which just isn’t coming. Some may be frustrated by the film’s conclusion, but Garland seems disinterested in thematic and narrative tidiness. He indulges biblical references, returns repeatedly to images of a stone fertility goddess, finds a dead deer in the woods and zooms, zooms, zooms right into the empty black cavity where its eye used to be, deep into the darkness. He’s poking, prodding, invoking, but not resolving. Interpret away! Or just sit there and feel shaken. Both are appropriate responses.

Of course, the film dredges its horror from the dank pit of domineering sexist piggishness, Garland challenging his female protagonist with a series of hetero-male microaggressions that slowly ramp up to outright aggressions. What angries up the blood is our sense that Harper doesn’t deserve any of this; we don’t know all that much about her character beyond the assured psychology of Buckley’s nonverbal performance. She’s undoubtedly sympathetic, but also symbolic within Garland’s grandiose, but sloppy metaphor for the way men and women interact. He reaches a crescendo with a scene that’s as terrifying as it is pathetic, two words that describe toxic masculinity quite perfectly.