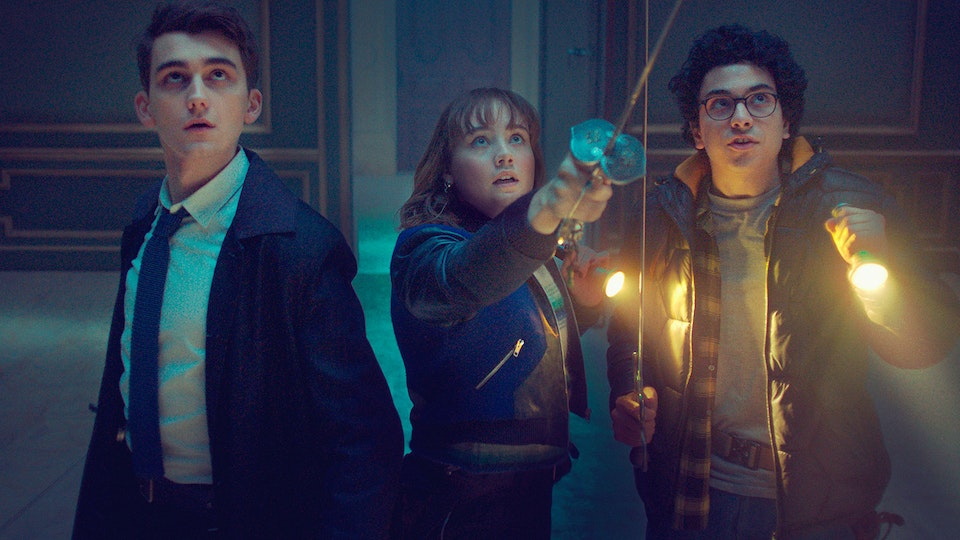 The thorny problem of how to establish the rules and mythology of a fantastical parallel world in a multi-part TV or film series has been cunningly solved by writer/director Joe Cornish in the opening titles of Lockwood & Co. Instead of relying on a lengthy voice-over, clunky expository dialogue, or, heaven forbid, an opening title crawl, to explain where we are and what’s going on, the title sequence is a helter-skelter montage of newspaper headlines and TV news reports explaining the alternate universe in which the series is set. The salient facts: this is basically our world but stuck in a time closely resembling the 1980s, due to an epidemic of ghosts who can actually kill people. So, there are no smartphones, no social media, no flatscreen televisions or, indeed, streaming TV services, and barely any digital tech at all.

This archaic, analogue society, hewing closely to the original source material of Jonathan Stroud’s YA book series, is beautifully realised by production designer Marcus Rowland. It’s essentially Thatcher’s Britain minus Thatcher; stark, edgy and dangerous, and the show’s use of real London locations – a lot of austere concrete buildings and crumbling mansion houses – works a treat.

This meticulously realised setting provides a vivid backdrop to the main action, and the three young protagonists, Lucy, Lockwood and George, are given a lovely, fusty old base in a distinctly Sherlock-ian, 221b Baker Street-style house, as a home for their ghost-hunting operation. There’s a wonderful sense these three teens have found in each other their own version of family, and the rickety old house feels like a sanctuary away from uncaring and exploitative adults.

Lockwood, a nerdy yet dashing 18-year-old in suit and tie, surrounds himself with antique books and objects. There’s not only a head in a jar in the basement but an entire no-go area of a mysteriously locked room, which Lockwood doesn’t like to talk about. Cameron Chapman brings this elusive, complicated character to life in a brilliantly modulated performance, and Ali Hadji-Hesmati is equally well cast as Lockwood’s super-smart, slightly difficult best friend George. The most relatable of the three young heroes, however, is Lucy, and Ruby Stokes not only imbues her with a kick-ass determination to do the right thing, she also sells her big confrontations with the supernatural nasties so well, we’re genuinely scared on her behalf.

None of this impressive world-building, character development and storytelling would work, though, if it wasn’t for the consistently intelligent, wryly funny dialogue. Forget the YA label; this is an addictive, sophisticated supernatural thriller which will keep cynical old duffers entertained throughout. (It helps that the ’80s pop-goth needle-drops, from Bauhaus and The Cure to The Stranglers and Siouxsie And The Banshees, are so well deployed.) Let’s hope the notoriously ruthless Netflix big cheeses give Lockwood & Co. more opportunities to delight and intrigue us.