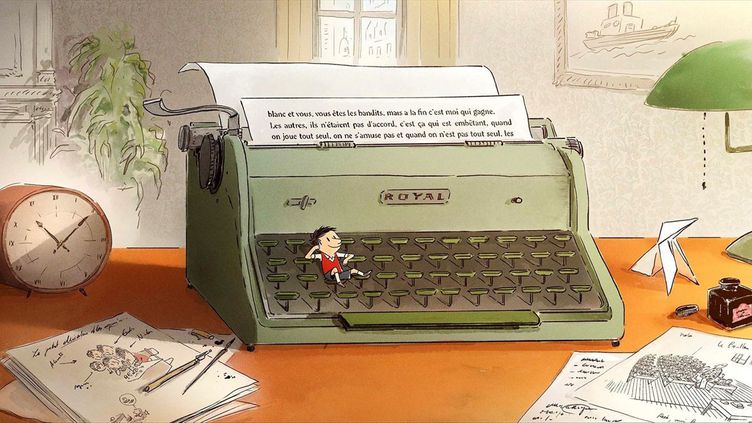 For people of a certain age, it would be hard to resist the animation Little Nicholas – Happy as Can Be [+], presented as a Special Screening at Cannes this year. Indeed, the adventures of Le Petit Nicolas, sweet but not stupid, good-natured but playful, kept many kids company when they were growing up. As well as their parents, which is what this film seems to be very aware of.

Not just a simple retelling of one of Nicholas’ mishaps, it’s actually more of an origin story. Suddenly, René Goscinny (voiced by Alain Chabat) and Jean-Jacques Sempé (Laurent Lafitte) are animated as well, finally fully integrated within the universe they created. It’s cute and it’s old-fashioned. Today’s kids might not get it at all.

Unless they’ve been previously prepped, that is – or are French – as the filmmakers provide a bit of a “best of” overview here. There is a “do you remember?” feeling hovering over the whole thing, as instead of picking one story, they just go through them all. Which – one assumes – could be a tad too confusing to serve as an introduction to this universe populated by rowdy schoolkids, their hapless parents, and girls who manage to manipulate everyone. But if you do know the drill, it’ll do, pig. It’ll do.

It’s an undoubtedly rose-tinted view of how these men’s partnership came about (over some red wine) or how they picked that boy’s name (it was on a bus driving by). They decide to give him some friends, they brainstorm over his parents. The always hungry Alceste was inspired by René himself, it is suggested, who apparently also “knew his way around a meal”. It gets to the point where Little Nicholas himself, watching their first TV appearances, is actually yelling out at the screen: “It’s me!” What merry mayhem.

But then, some sadness starts creeping in. Despite Ludovic Bourse’s energetic score and even a proper musical number, these men’s childhoods and the lives of their families weren’t always the easiest. There was pain and plenty of struggle, and the happiness they were sometimes deprived of, they recreated. That’s how they used their talents.

It’s also a tale about grief, this movie. Goscinny, and this is not exactly a spoiler, passed away in 1977. In no time, the focus switches – it’s about saying goodbye to a creative partner, but also to the man who willed you into existence, as well as so many others, as figurines of Asterix and Obelix are lovingly placed on his desk.

Co-written by Goscinny’s own daughter, it really feels like a conversation with one’s lost parent, or at least someone who gave children something they have loved for the longest of times: just like Tove Jansson and the Moomins, or AA Milne and Winnie the Pooh. Also, the way loss is explained, or at least talked about, in this picture could actually be useful to others. Even though, unlike here, they probably can’t promise their own children immortality.