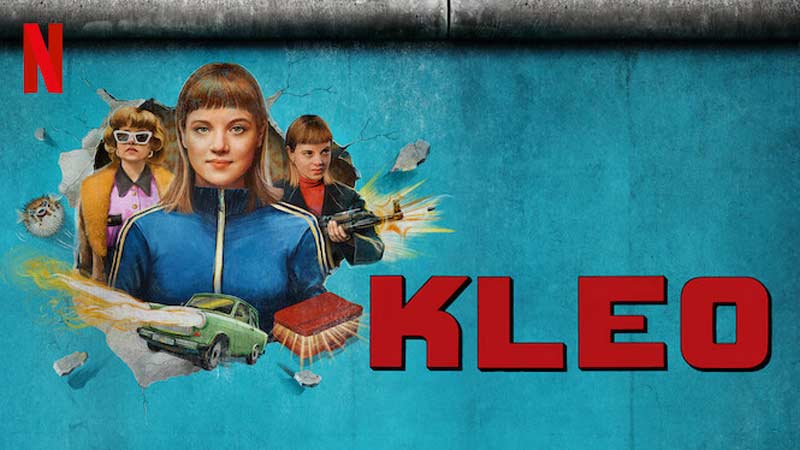 Kleo Straub (Jella Haase) is an undocumented agent for Stasi, East Germany’s Ministry for State Security. We first see her taking a secret tunnel into West Germany, under the supervision of Andi Wolf (Vladimir Burlakov) and the volatile Uwe Mittig (Vincent Redetzki), put on a wig and dress, and go the West Berlin club Big Eden. There, she takes very little time to attract and then eliminate her target, via tainted blow snorted in the men’s room. Another agent grabs a key to a locker containing a mysterious red suitcase

Also at the club is Sven Petzold (Dimitrij Schaad), a cop in the police department’s fraud division, saw Kleo come out of the bathroom before finding her target dead on the floor and remembers her from when she came to the bar and he hit on her. He draws a rough sketch that the homicide cops laugh at. But he insists that she’s the killer, even though she can’t be found and the coroner judged that the man died of an accidental overdose.

Despite warnings from his boss, Wolf and Kleo are in a relationship, and they’re both overjoyed that she’s pregnant. But when the sketch created from Sven’s eyewitness report reaches her Stasi boss, a series of events is set in motion that sends her to prison for life on treason charges. Everyone she knows in the Stasi testifies against her, as well as her grandfather Otto (Jürgen Heinrich), a high-up commandant in the military who raised her after her parents died. She loses the baby in a prison fight.

But things change in Berlin while she’s in prison; the Wall falls and all political prisoners are being released. It’s now 1990 and East Berlin is starting to change — for the worse, in her opinion. But she’s got other things on her mind, namely revenge against the people who turned in her, starting with her grandfather. Sven, rifling through now-irrelevant files of GDR political prisoners, spies Kleo’s mugshot and remembers her from the incident at Big Eden. Meanwhile, the suitcase is still circulating, as it’s passed between people in Chile, of all places.

Kleo promises to be a stylish and slick series which will take its title character from Europe to South America and back again, in pursuit of both the red suitcase and the people who set her up to go to prison. Created by Hanno Hackfort, Richard Kropf, and Bob Konrad, the show isn’t looking to be anything but a spy thriller with lots of set pieces, creative ways to kill people, and Haase in various wigs and early-’90s fashions.

While we tend to want more from shows than just slickness and action, we’re not expecting that from Kleo, mainly because we’re not given any indication that it’s going to be anything but what it is. It’s not trying to be deep, or make a commentary on post-communism Germany. It’s about a Stasi spy chasing down people and likely killing them because they sent her away and essentially killed her dreams of a normalish life with Wolf.

Haase is great as Kleo, because she can shift from hardened killer to overjoyed at her pregnancy to angry about being sent away even though she’s innocent. It’ll be fun to watch her move around in various disguises to get to the people she’s seeking out, and it’ll also be fun to figure out how the contents of the red suitcase play into it.

Schaad is also fun to watch as Sven, mainly because he’s a trying-too-hard cop who thinks he’s got an in with the ladies despite the fact that he has a family to come home to. But once he realizes that the woman he saw at that club in 1987 wasn’t a mirage, his pursuit of Kleo will be a central conflict for the entire first season. Even if they join forces at some point, it should make for a funny combination.