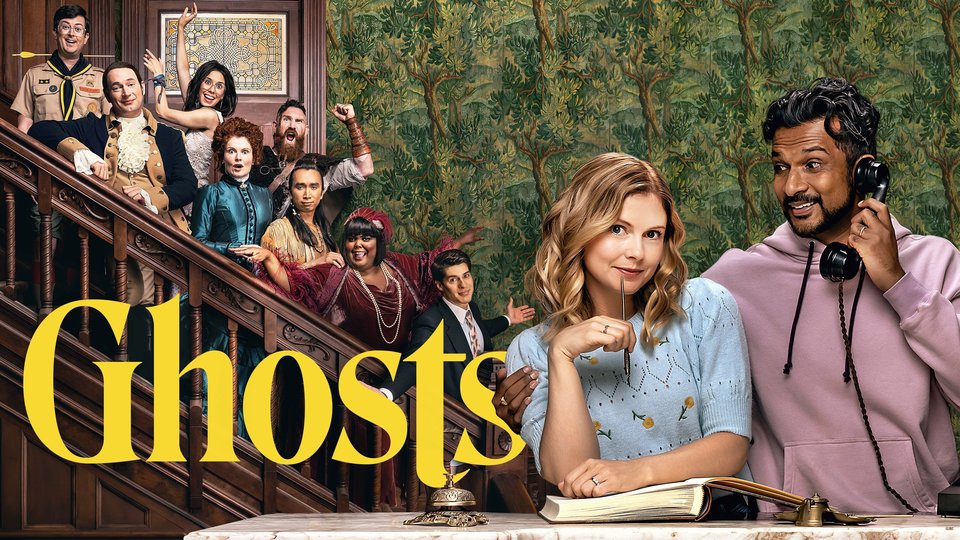 The new CBS series ‘Ghosts’ is creating buzz online. Airing its last episode on 20th January, it is an American remake of the original British series of the same name which began airing on BBC in 2019.

Both shows follow the basic premise: a young couple inherit an old worn-down country house after the wife’s distant relative who owned it passes away. It turns out that this manor houses the ghosts of a number of people who died in this land. These ghosts can see everything that goes on in the house and aren’t afraid of passing comments about it.

The British ‘Ghosts’ (created by Mathew Baynton, Simon Farnaby, Martha Howe-Douglas, Jim Howick, Laurence Rickard and Ben Willbond) was a big hit among BBC audiences when it aired in 2019. Its plotline of eccentric ghosts (all from different periods) living under one roof and quarrelling with the alive owner wasn’t an original concept. But its execution and absolutely rip-roaring sense of humour proved to be a huge success for viewers.

When CBS bought the rights to adapt the show into an American show, people were understandably skeptical. It didn’t help when a short teaser was released online some months ago which resulted in the internet reaction to be rather hostile. After all, do we really need another remake of a hugely successful show which was perfect in itself and had no flaws to be improved on? Moreover, the language of this old show was English so do we really need another English-language remake? And this show isn’t even that old for it to be retold to the same generation…

Developed by Joe Port and Joe Wiseman, the remake follows New Yorkers Sam (Rose McIver) and Jay (Utkarsh Ambudkar) as they move into the remote Woodstone country estate after Sam’s distant relative dies. One day, Sam trips and hits her head and has a near-death experience. Waking up from a coma, she can now see, hear and speak with the ghosts in her house. She must now deal with challenges from both the physical world and the spiritual.

While the show’s best points are the jokes and situations adopted from the British show, the best original facet of this CBS series is certainly the cast who splendidly play the ghosts and even revel in their antics. Some of these ghosts are the flamboyant and petty American Revolutionary officer Sir Isaac (Brandon Scott Jones), the prim and proper former Lady of the Manor Hetty (Rebecca Wisocky), gossip-hungry 1920s-era jazz singer Alberta (Danielle Pinnock), the super-friendly Boy Scout leader Pete (Richie Moriarty), the chauvinistic Wall Street trader Trevor (Asher Grodman), the aggressive and physically intimidating Viking Thorffin (Devan Chandler Long), 1960s stoner hippie Flower (Sheila Carrasco) and Lenape Native American Sassapis (Roman Zaragoza). There are other ghosts in the plot too, such as the ghosts living in the cellar who died of cholera whose subplot is another highlight of the show (but is once again a conception of the genius minds behind the British series).

This show will be hilarious, delightful and absolutely refreshing to viewers who have not seen the original. With its louder slapstick and in-your-face humour, the show has an American flavour due to its mostly family-friendly atmosphere and lots of heart. It is fast-paced compared to the British show as well as having a sunny appearance compared to the original’s rather misty, cloudy British look. The lenses for the cameras in these two shows are also different with the American remake looking more ‘flat’. And of course, the original took a look at various eras of British history while this one explores a bit of American history.

Some scene-to-scene similarities and dialogue-to-dialogue copying might enrage the fans of the British show which had a beloved ‘Horrible Histories’ cast, but the American remake does it well too. The remake also makes very American references such as the hypocrisy of the white owner of the manor telling the ghosts that its her land leading the Native American ghost to counter her claim, or Lady Hetty’s jokes about the children working in her factories being far happier than other child workers, or the American Revolutionary’s insecurities surrounding his more famous rival, the now famous Broadway figure of Alexander Hamilton. The American ghosts’ battles against the British ghosts living in the shed are also essentially American situations.

The older members of the cast are real show-stealers such as Rebecca Wisocky as Lady Hetty who, during her absence in two or three consecutive episodes, made us notice her absence and miss her dearly. Secondly, Sir Isaac and Alberta’s friendship in the face of the owner-ghost dynamic adds to more spice and entertainment. Alberta adds some much needed jokes to the show which are not in the British one with her diva-like personality and her speaking of encounters with mob bosses, illegal alcohol sellers and a crazed fan. The younger cast members are a hit-and-miss, however, with Zaragoza seeming rather tired and distracted as Sassapis. His lines are weak and the subplot with him fighting Thorfinn over a TV show is unfunny, unnecessary and even looks like a school play with the dialogue exchanges, so is his romantic subplot involving another Lenape ghost. Carrasco as Flower is also another weak and unmemorable character with her two-dimensional, heavily stereotyped hippie character. The writers fail to squeeze the juice out of her underwritten character, and the same can be said for Sassapis whose Native background and history are ripe for both comedy and drama but are ultimately untapped. A subplot concerning Flower robbing a bank in the 60s had much potential but this episode was rather lifeless due to the poor writing. Sassapis and Flower also happen to be original characters whose scenes were not taken from the BBC version. That explains why these characters, their dialogues and their situations are also the most humourless in the show, which gives even more incentive to the fans of the British show to criticise this CBS version.

However, one standout character among the younger ghosts is Asher Grodman as the newest of the ghosts: 90s finance bro Trevor. Grodman’s dramatics and heavily self-assured and confident acting chops make him extremely engaging in spite of his obnoxious personality. Although a derivation of the Tory MP character from the British series, Grodman adds his own loud and brash acting to make the character an essentially American figure.

Yet another highlight of this show is the genius switching of shots where Sam is surrounded and hounded by the ensemble of ghosts and then the shot cuts back to her standing alone, seemingly talking to herself. It needs to be watched to truly be enjoyed.

Much of the brilliant humour also lies in the ghost cast whose reactions, horrifying screams and exasperated sighs at the unwitting people visiting the house make you laugh and smile. It is a testament to their excellent group chemistry (both cast and character).

Utkarsh Ambudkar doesn’t get to do much in his role as Jay, the alive character who is husband of Sam. But he does his best with what he can. He absolutely shines in the episode where Hetty takes over his body, causing him to exhibit the behaviours of the lady of the manor. Rose McIver (from ‘iZombie’) is bright, sweet and innocent as the suffering homeowner Sam who must now deal with the new reality of being almost like a second mom to this loud nursery of manic, quarrelsome ghosts.

Those who are upset at this remake’s existence can be well assured that the British original is not going anywhere and can still be watched. Remaking a gem never “spoils” the original, it only expands its legacy. Although it has its flaws, ‘Ghosts’ is one of the strongest TV debuts of 2021. Gather your loved ones to watch this hysterical slapstick sitcom.