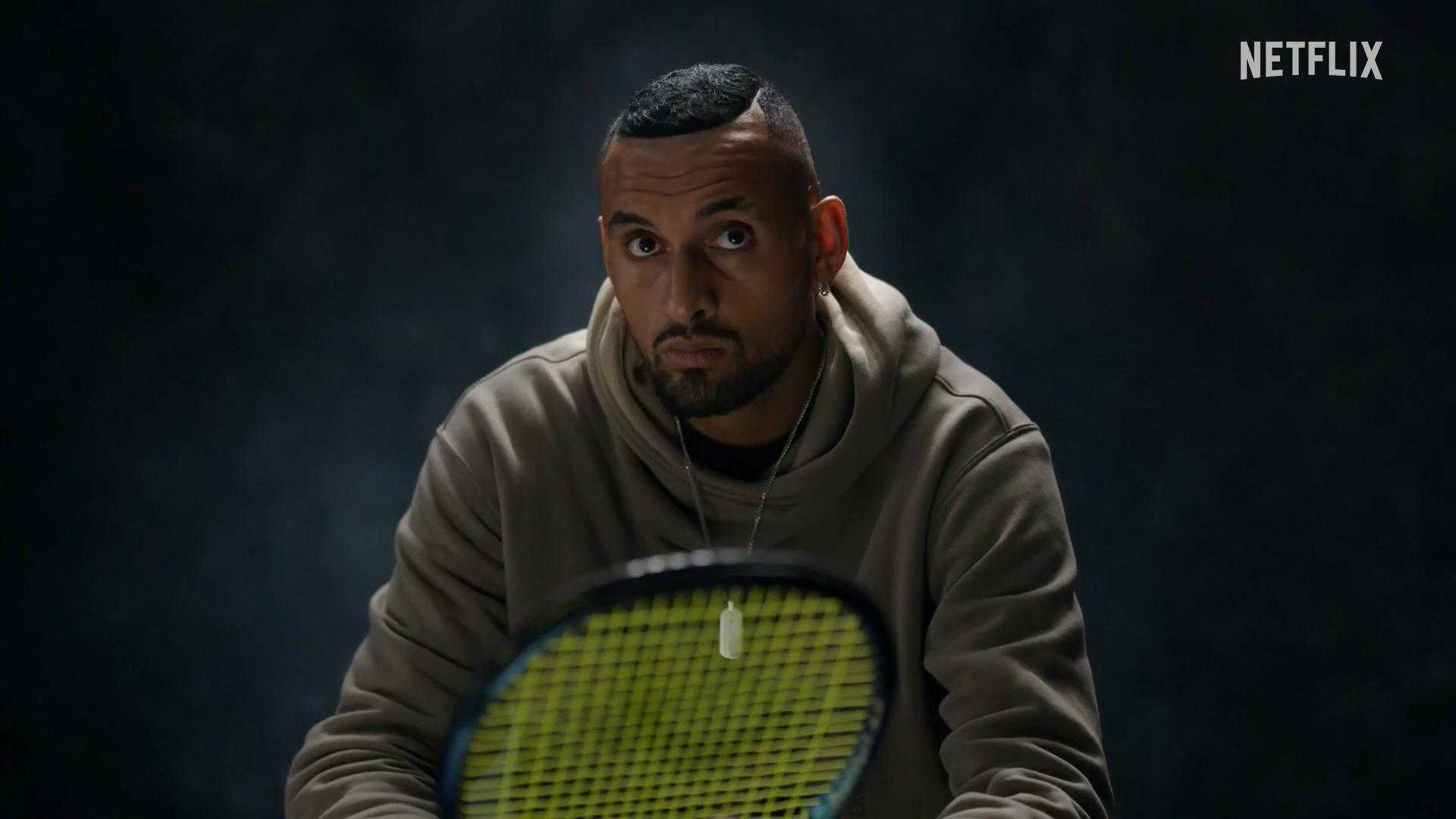 The first time we hear from Nick Kyrgios in the soon-to-be released Netflix docu-series ‘Break Point’, he is on a private jet with his girlfriend Costeen Hatzi, about to touch down in Melbourne ahead of the 2022 Australian Open.

The Canberra native is the main focus of the opening episode of the fly-on-the-wall series, which is created by the same producers who brought to the streaming service Formula One’s popular ‘Drive to Survive’.

The first five episodes of ‘Break Point’ will drop on Netflix on January 13 and they follow a select group of tennis players over the course of the opening six months of the 2022 season; from the Australian Open through Roland Garros.

While tennis as a sport has been dominated by superstars like Roger Federer, Rafael Nadal, Novak Djokovic and Serena Williams over the past 15 to 20 years, this show is mostly about players looking to rise to that status.

“We may finally be witnessing a major shift in the game, so we wonder who will take their place?” a voiceover asks in an opening sequence.

“We can’t just wait for them to retire, we need to find a way to try to win,” declares 22-year-old Canadian Felix Auger-Aliassime.

But if you’re new to tennis and are tuning in to ‘Break Point’ expecting to follow a story about a changing of the guard in the sport, you won’t necessarily get what you came for; at least not in the first five episodes. There are more near-misses than underdog triumphs in that regard.

The series is a mix between a tennis explainer for people who know little about the sport and an attempt to highlight a diverse group of players, each hailing from a different background but ultimately struggling with the same mental challenges and pressures posed by an unforgiving 11-month-long world tour.

You get someone like Kyrgios, who is contemplating his future and wondering whether the 2022 Australian Open will be his last appearance at his home Grand Slam. Former world No 1 Andy Roddick describes him as a “part-time player” who treats tennis like a “hobby” before adding that he wished he would have had his talent.

“He’s not a bad guy, but he just becomes a devil when he enters the court,” says one of his rivals, Greek top-five player Stefanos Tsitsipas.

The producers try to shed light on the ever-compelling character that is Kyrgios, showcasing his talent, his on-court tantrums, and touching on his mental health struggles; but you end up with more questions than answers and without any real understanding as to why he feels or acts a certain way.

There are so many layers to the Kyrgios persona and barely any of them were properly examined. Instead, half of the episode is dedicated to his Australian Open title run in doubles alongside his friend and countryman Thanasi Kokkinakis.

There is a scene where Kyrgios’ mother Norlaila shares her concern for her son.

“He just became aggressive. Was just so angry, always angry at something,” she says. We never find out exactly why Kyrgios seemed constantly enraged or how he moved past that stage.

Kyrgios admits the lonely nature of the sport is what he struggles with the most and briefly mentions the racism he faces, without getting into details. He recalls times where he was “spiralling” and was out drinking every night and his manager, Horse, remembers a period where he would track Kyrgios’ phone and go search for him the next morning, often before matches.

By the end of the episode, with Kyrgios crowned a Grand Slam doubles champion, the narrative switches back to tennis.

“I’m here to show you that I’m one of the best players in the world. And I can’t see anything holding me back,” he says.

The lack of depth in portraying the characters continues through most episodes.

Tunisian trailblazer Ons Jabeur’s historic triumph in Madrid is highlighted in episode four. But there is more time spent listening to experts like Patrick Mouratoglou explain how impossible it is to make it to the top in tennis, coming from a small country like Tunisia and without the proper backing of sponsors, than there is examining how Jabeur actually managed to pull it off.

That’s not to say the docu-series is devoid of any real insight into the psyche of a tennis player.

If there’s one thing ‘Break Point’ gets right it is the brutal, self-loathing part of the sport; the mental toll it takes on its protagonists; how players often equate their self-worth by wins and losses and how quickly they can slip into darkness when they cannot perform the way they want to on court.

Paula Badosa, Maria Sakkari and Ajla Tomljanovic did not shy away from being vulnerable on camera and gave us some of the most poignant and powerful scenes in the show.

“I really want to leave the court. I have so many negative voices in my head, ‘you’re a bad player, you’re not able to do this’, it’s very tough to turn it off,” says Badosa as she discusses her feelings during her heavy defeat to Simona Halep at her home tournament in Madrid.

In an intimate conversation with her team, in which they are checking in on her mental health, Badosa says: “When I’m okay, I feel at home on court and I feel like this is my place. But I go from that to ‘get me out of here, I want to die’.”

In episode two, Tomljanovic is incredibly “angry” at herself for her performance against Badosa at the Australian Open and likens it to a lightweight taking on a heavyweight.

“What’s the point of being out there if I don’t believe I can win?” she tearfully ponders before suggesting she should just retire.

Sakkari reveals she actually retired from the sport “for four days” after her loss to Barbora Krejcikova at the 2021 French Open.

Maria Sharapova, a retired five-time Grand Slam champion who was renowned for her mental strength and fighting abilities, said it best on the show.

“In tennis you lose so much more than you win. But even when you’re a champion and you come off the court losing. You ask yourself, ‘Am I good enough?’ But you have to keep facing it, otherwise you’re not a tennis player. That’s the whole point of the sport, is that you’re always searching, you’re always trying to find who you are and where you’ll go,” says the Russian.

A key takeaway from the series is that not every sports story worth telling has to end in triumph and it’s not always about the person walking away with the trophy at the end of a tournament. ‘Break Point’ explores the journey, the disappointments, and the little victories along the way.

As you watch Sakkari sit alone on the ground breaking down in tears after reaching the Indian Wells final, you understand how much all those semi-final losses had been weighing down on her.

Matteo Berrettini shares his frustration of losing to Djokovic so many times at the majors, only to then fall to another all-time great, Nadal, in the Australian Open semi-finals.

“I feel like it doesn’t matter how much you try, you’re just not good enough,” he says while Facetiming his then girlfriend Tomljanovic.

Taylor Fritz’s decision to compete in the Indian Wells final with an injured ankle was a great example of just how much a player is willing to risk, not for a win, but to avoid regret.

“If I pulled out, it would bother me my whole life,” Fritz tells his team, who are advising him not to play to avoid further damage to his ankle.

The complexity of Toni Nadal’s position as a coach of Auger-Aliassime getting ready to play against his nephew and former protégé Rafael Nadal was depicted well in episode five, while the self-centred aspect of tennis was touched upon in a conversation between Tomljanovic and Berrettini.

Jabeur’s husband and fitness trainer Karim Kamoun asking her on camera about whether she wants to have a baby, knowing how much she wants one, brings to light the sacrifices women athletes have to make for the sake of their professional careers.

The ‘Break Point’ project came to life in the wake of the incredible success of ‘Drive to Survive’, which has been credited for a surge in the popularity of F1 worldwide, and particularly in the United States.

Although the same production team is behind both docu-series, it’s important for those tuning into the tennis version not to compare it to its F1 counterpart. The sports and the people in them could not be more different and could never be given the same Netflix treatment.

It’s unclear whether ‘Break Point’ will attract new fans to tennis – which is the main goal of the project – but at least it is a start. Some of these players will be revisited in the second half of the season, while other characters like prodigious world No 1s Carlos Alcaraz and Iga Swiatek, Frances Tiafoe and Tsitsipas will be introduced properly.

A deeper approach in the coming episodes can help viewers connect with the players even more and will give fans further reason to root for them.