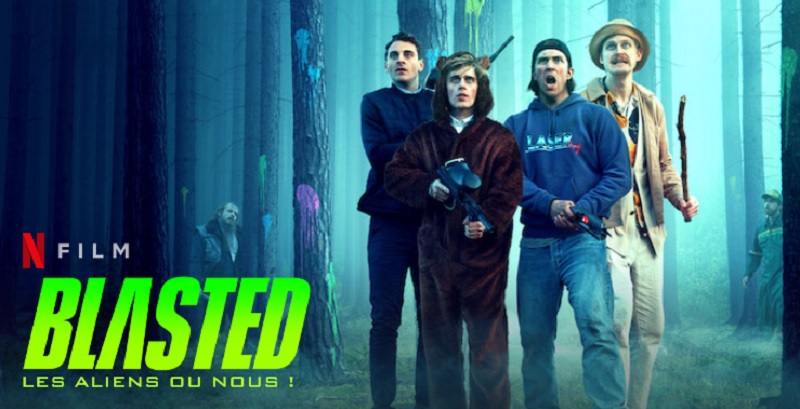 Netflix movie Blasted is about five dudes at a weekend bachelor party, but the title doesn’t refer to what happens when they do too many tequila shots. No, this is a sci-fi flick offering us ray guns and aliens, running and shooting, and jokes, in what is hopefully a high-larious mashup of genres. A real-life mystery – the not-quite-explained floating lights often seen in Norway’s Hessdalen valley – is the basis of a story about doofuses stumbling over an alien invasion; thankfully, two of those doofuses are former laser tag champions, surely a heretofore impractical skill that can finally be put to good use.

The Gist: HESSDALEN: a remote woodsy area in central Norway. Not much happens there, except the strange phenomena of floating green light-globs that locals theorize are of extraterrestrial origin – or maybe there’s a totally logical scientific explanation for it? The movie gives us an answer right away, as we see the globs take over the brains of a scientist and a YouTuber. Cut to: Sebastian (Axel Boyum), a small-time hedge-fund manager nervously preparing a presentation. His buddies Pelle (Eirik Hallert), a weirdo in goofy clothes, and Audun (Mathias Luppichini), a weirdo in a tidy suit, interrupt to tell him they’re throwing a surprise bachelor party for him. They’ll hang out in a cabin in Hessdalen and get wild and crazy playing board games! I guess this is what happens when you’re 5,000 miles from Vegas, and too many bachelor-party movies have been set in Vegas.

Wild card No. 1: Sebastian’s investment pitch to rich guy Kasper (Andre Sorum) bombs, and, out of desperation, and rather improbably, he invites Kasper, a man who says he likes his “balls tickled,” to the party. Even more improbably, Kasper agrees. And now the pressure’s on to entertain the Kasper, who I think with the “balls” comment was implying that he’d prefer strippers and booze to jigsaw puzzles and Pass the Pigs. Wild card No. 2: Sebastian’s fiance surprises him by inviting Mikkel (Fredrik Skogsrud) to the party. Seb and Mikkel were once crowned Europe’s greatest laser tag duo, with their photo in the newspaper and everything. Seb has moved on, and looks down on Mikkel for being an adult who still plays laser tag with 12-year-olds. So there’s tension between them, especially when Mikkel packs his tag gear for the Hessdalen excursion.

It goes poorly. Kasper shows up with a furry bear onesie that Sebastian feels obligated to wear for the rest of the movie. Audun tries to fire everyone up for an INSANE private tour of the observatory. Mikkel can’t go anywhere without his laser pistol. Pelle wears a dumb hat. Kasper doesn’t seem any closer to committing to an investment deal. They decide to play paintball at a nearby course, and that’s when they notice the locals, especially the ones with mullets, are acting funny: They have a green glow in their eyes, act like homicidal-maniac zombies and sure seem to be killing people. A nearby bored and very pregnant cop, Hjordis (Ingrid Bolso Berdal), gets involved. During an altercation, Mikkel takes aim with his laser pistol and zaps the green globule right out of a human’s head, which is an act of kismet if I’ve ever seen one.