Attack of the Hollywood Cliches! 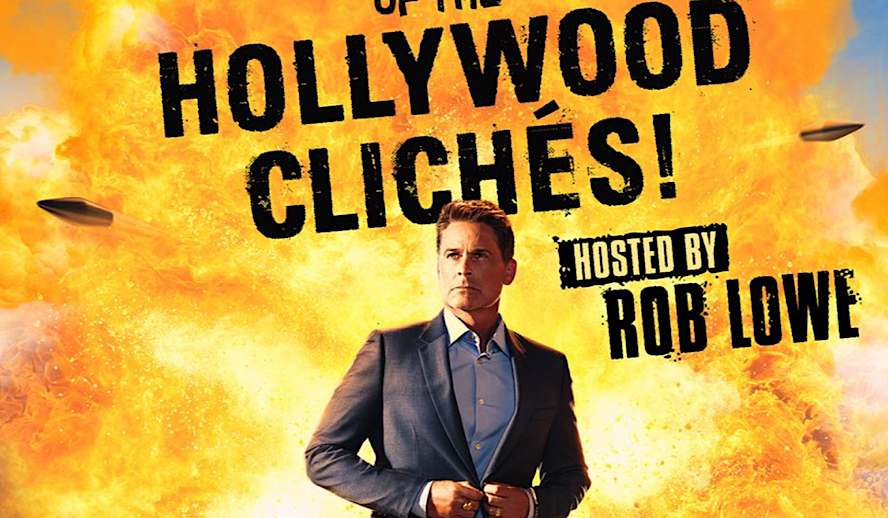 The last time I saw Rob Lowe – and I did actually have to check this wasn’t the result of some kind of pandemic-induced hallucination – was in ITV’s Wild Bill, in which he played a Miami ex-cop who had relocated to east Lincolnshire to become the chief constable. It was an astonishing expression of the undying trouper spirit that must endure in every actor if they are to survive. We watched Billy Hicks from St Elmo’s Fire drive a Volvo through a field of cabbages, for chrissakes! About Last Night’s Danny Martin faced off with a baddie atop a wind turbine in the Boston countryside!

Lowe is game, is what I’m saying. And he is game again as presenter of Attack of the Hollywood Clichés! (Netflix), a piece of fluff and nonsense – these are terms of praise – by Charlie Brooker and other assorted writers. Looking at the movie industry’s most frequently used tropes, it was made up of a plethora of clips, comments and a small but crucial extra measure of wit and deftness than the genre customarily manages.

Which is not to say that the gang forgot the pleasure of silliness raised to high idiocy. “Since all aspects of your protagonist have to be remarkable,” explained Lowe in his introduction to the Maverick Cop cliche, “it’s not enough for them just to have a job. Whatever that job is, they’ve gotta job the shit out of it! Especially if their job is THE job! The cop’s job!” There was something extra – if ineffably – pleasing about hearing a quintessentially US star lean into such quintessentially English daftness. The writers knew it, he knew it and we knew it. Lovely. He also assured us, when holding the grocery bag with a baguette sticking out of it to kick off the section about Hollywood’s favourite domestic interiors prop, that the bag was acting as a protective cover to stop him absorbing any carbs through his skin. “All movie stars insist on it.”

Attack of the Hollywood Clichés! managed to cover just about every cinematic chestnut there is, from the Meet Cute and Manic Pixie Dream Girl to Dead Man Walking (never be the character two days from retirement, and certainly don’t reflect on your love and aspirations for your young family) via the likes of the Jump Scare, the Spit-take and Montage Mode. Apposite clips and informed observations from a variety of actors, critics and cultural commentators abounded. It was crammed with bits of film trivia, like the reason a false scare is known as a “Lewton bus” (after horror producer Val Lewton) and the history of the Wilhelm scream – that bloodcurdling cry you hear at moments of high celluloid drama, first recorded for Gary Cooper’s 1951 outing Distant Drums and used with increasing irony-slash-knowing-fondness as a stock sound effect ever since. It covered an impressive amount of material – managing in the Maverick Cops segment, for example, to nod not just to the Dirty Harrys of history, but the latest additions too, like Kate Winslet’s mighty Mare of Easttown. You felt like you were getting a lot of entertainment for your money/60 minutes of life, which was a nice change from the usual feeling induced by this sort of programme, ie that it was 15 minutes of material spread unforgivably thin.

It also managed to confront the cliches that are less instantly comic. The Smurfette Principle noted that most female roles exist in the service of male protagonists and viewers, while the Meet Cute acknowledged that most potential suitors’ behaviour in romcoms would count as quite serious harassment in the real world. Bury Your Gays pointed out Hollywood’s unwillingness to let non-heterosexual characters survive (and included the statistic that 40% of such characters nominated for Oscars are dead before the end credits). Consecutive segments on the White Saviour and The Magical Negro tropes briefly but firmly traced their histories and included the scene from The Nun’s Story in which Audrey Hepburn and her porcelain-skinned sisters in Congo are teaching the local women how to wash their babies, and an excerpt from The Legend of Bagger Vance, the story of Will Smith teaching a white man how to play better golf. “I don’t think Will Smith’s at home rewatching The Legend of Bagger Vance,” commented TV writer and cultural critic Ira Madison III drily. “Some white person in Ohio is.”